Insurers are expecting the reappearance over the next few years of two infamous villains, inflation and recession, according to Goldman Sachs’ annual global insurance survey.

Inflation was a clear leader in the top concerns race with 28% of insurance companies globally citing it as the greatest macroeconomic risk to their portfolio for the first time in the 11 years that Goldman has conducted the survey. In fact, 91% of companies in the Americas (79% globally) expect inflation to be a risk this year.

After inflation, it was a tight race for the next three, with 20% citing U.S. monetary tightening, which goes hand in hand with an inflation response. The majority of respondents (87%) said they think the Federal Reserve will raise rates at least three times this year, with 36% in the Americas expecting more than four increases.

Credit and equity volatility are next on the roster of risks at 18%, with the fourth horseman, U.S. recession, closing in at 16%. Sixty-three percent of respondents said they believe an economic recession will hit the United States in the next two to three years, with Asian companies leading the pack with that prediction. On the plus side, the respondents did not expect recession to begin this year, said Michael Siegel, Global Head of Insurance Asset Management for Goldman Sachs Asset Management.

“You could see this year looks like clear sailing,” Siegel said during a media preview of the report, “but planning for a recession down the road.”

Those concerns, particularly on inflation, are expected to accelerate the shift to private asset classes for returns, Siegel said, citing two broad trends in the race for returns.

“One is a continued movement from public assets to private assets. That would be public equity to private equity, that would be public fixed income to private fixed income in order to pick up the illiquidity premium,” Siegel said during a media preview. “And then within asset classes themselves a continued movement toward private equity, green or impact bonds, middle market corporate loans, which are floating rate assets, infrastructure, debt and equity, real estate equity, and US investment grade private placements.” 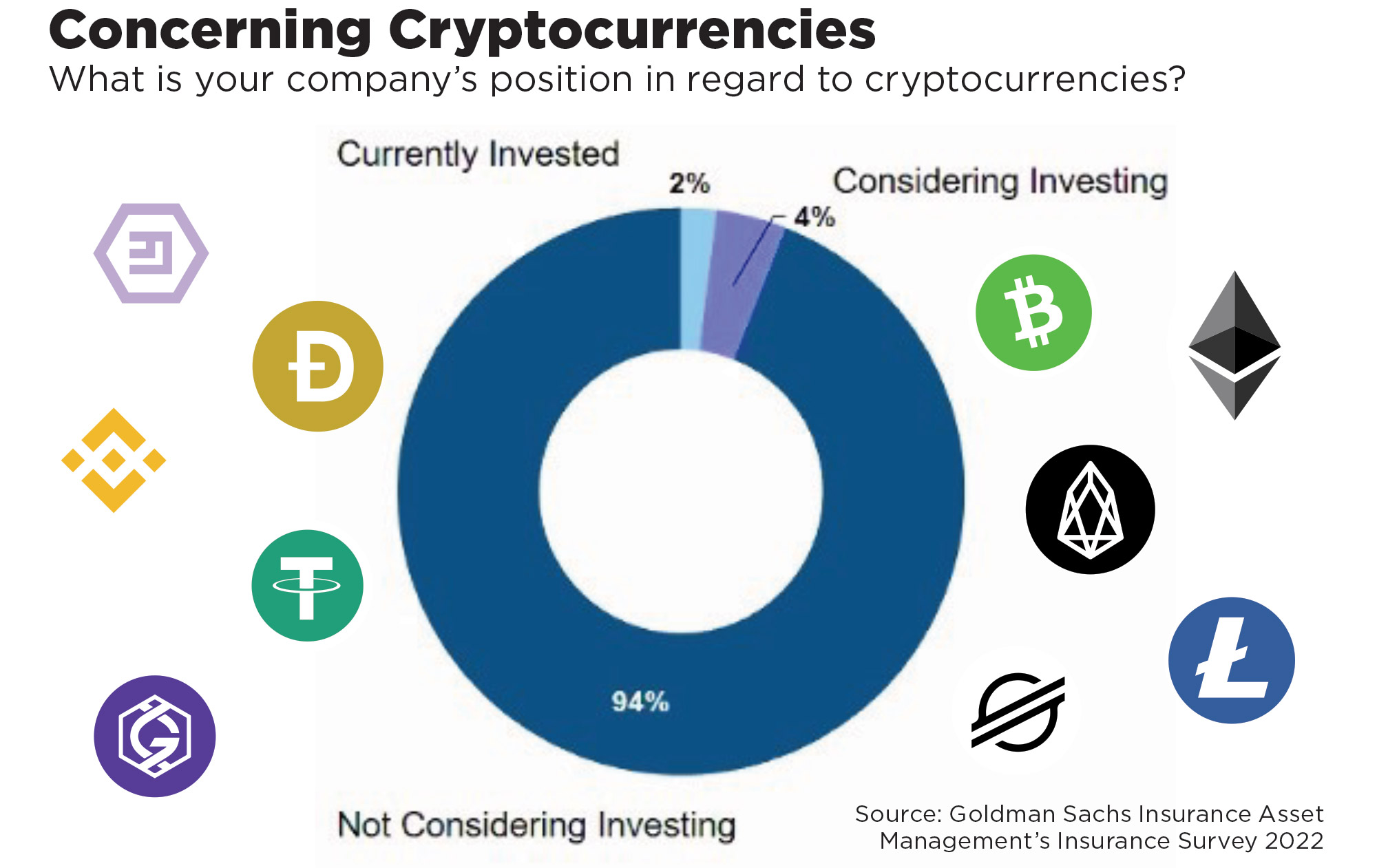 From Public To Private

One of the major factors pushing an investment shift is the expectation of an aggressive increase in the U.S. 10-year Treasury with 72% of respondents predicting that the bond will be at least 2% this year, putting older bonds at a disadvantage while improving terms for new note purchases.

“If we get a sharp, steep rise in rates, that will end up causing disruptions in markets,” Siegel said. “And volatility tends to be bad.”

Although the 10-year Treasury is the bedrock of insurance investing, it is not the winningest bet. In fact, government and agency debt was listed as the poorest performer by 29% of respondents, with 65% saying it was one of the three worst performers.

By far, companies are looking to private equity to make some bank, with 32% of respondents expecting the asset class to deliver the highest returns this year, with 58% listing it in the top three.

Although it is second on the list, commodities lagged at 14%, with 34% listing it in their top three. But it is the first time commodities have been in the top three. Its appearance at the top of the returns list might be an aberration because of supply chain issues and concerns about geopolitics and inflation, according to the report.

Even though companies respect the return for commodities at the moment, that does not necessarily mean they will be placing their bets there. Respondents indicate they have little appetite for the asset class this year, likely because of high historical volatility and capital inefficiency, according to the report.

for several years. In the Americas six years ago, 85% of the respondents said ESG was not an important investment consideration, with 15% saying it was one of several considerations. This year, 77% of companies said it’s one of several and 15% said it was not a consideration.
“I suspect next year that this graph will just continue to look the same way, increasing in importance,” Siegel said.

This is the first time the survey asked about cryptocurrency.

“We did this because every time we meet with companies, they ask us about cryptocurrencies,” Siegel said.

Although the survey found that 94% of companies were not invested or planning to invest in crypto, Siegel was surprised because 2% of the companies were invested in crypto and 4% were considering it.

“In our dialogues with the companies that are invested or considering, their primary motivation is to understand the instrument, to understand the market, and in particular to be prepared if it becomes a more dominant market,” Siegel said. “And maybe at some point premiums are denominated in crypto.”

A Helping Of Kindness — With Elliott Appel