Ready or Not: The Year That Pushed Advisors Into Tech - InsuranceNewsNet

Ready or Not: The Year That Pushed Advisors Into Tech

Tell Roger Relfe about electronic transmission of data and cloud storage all you want. He is having none of it.

“I have yet to have a FAX hacked!” he will likely declare in his rich British baritone.

That was one of his answers in a survey conducted by the National Association of Insurance and Financial Advisors on behalf of InsuranceNewsNet.

Although at age 69, Relfe might fall into the demographic associated with the tech-averse, it is not a discomfort with technology that holds him back from using many tech tools. He has an ethical issue with relying on them. He is uncomfortable with the security risk exposure of transmitting data electronically, as well as the disconnect from his prospects if they are going through the process remotely.

“I won’t know the person who’s applying,” Relfe said in an interview following the survey. “As an agent, I have the responsibilities to both the person signing up and the insurance company that takes that application.”

Relfe has been in the insurance business for 30 years and has a practice called 90 Degrees West in Swansea, Ill. (it is 90 degrees west of London). In the 1970s, he was interested in computers but chose to spend 20 years serving with the Royal Air Force instead.

He uses a customer relationship management system, but only to keep track of important reminders, such as client birthdays and anniversaries. Then he sends handwritten cards by mail.

Relfe said that data he maintains in his CRM is basic and he does not store in it what he would consider clients’ sensitive information, such as notes on what he has advised clients.

“It allows for personal notes to go in there,” he said, “which I would do if they weren’t too personal.”

The COVID-19 shutdown has made business a little more difficult for Relfe, especially because of losing his in-person seminars. But he is still busy. In fact, when he was contacted for this interview, the phone call interrupted a fax he was receiving on an application.

His clients are more eager than ever for life insurance and are calling him for options. Relfe had three contract signings on his front porch in the past month. No So Great For Others

When asked to rate on a scale of 1 to 10 their difficulty in adjusting their businesses to pandemic conditions, respondents averaged 5.

Part of the reason for adjustment problems can be attributed to how much of their business was already tech-based. Nearly a third of the survey respondents did not have a CRM. 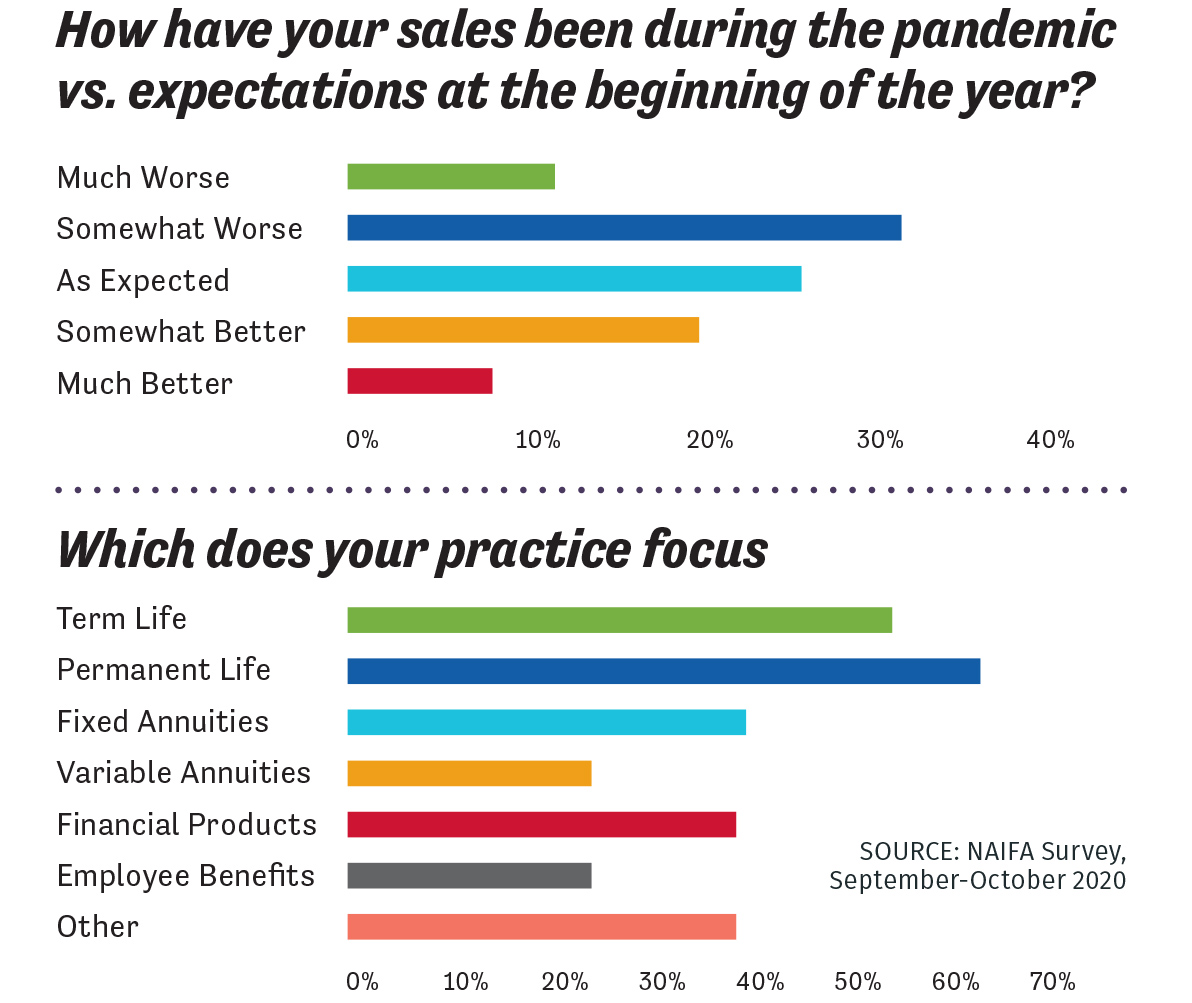 Advisors with a national clientele had systems in place for handling business remotely from lead to issuance. That eased the transition to an all-remote world. Joe Templin has lived in that place since the 1990s. Even back then, most of his business was remote.

“Seventy-five percent of my meetings were remote in the ’90s and early 2000s,” said Templin, who has a practice in Clifton, N.Y. “I would tell a client, ‘OK, do you want to meet face-to-face or do we want to do it over the computer so that you don’t have to deal with snow and parking and all that?’”

He also had a growing national-level client base, conducting remote meetings with clients from Los Angeles to New York and everywhere in between.

“Because moving electrons is a lot more efficient than moving molecules, as I tell people,” Templin said.

His clients appreciate that because they are nerds, as is he. Templin graduated from Rensselaer Polytechnic Institute, a school so geeky, he said, that “the mascot was The Engineers.” (He is not joking.)

“I’ve worked with hundreds, if not thousands, of people who work at General Electric as engineers and scientists,” Templin said. “So, I literally speak geek to them. They trust math. So, it makes the job really easy when you do your analysis, and then you just say, ‘OK, here are the numbers. Bam. Let’s talk about what it means and how to apply it, but numbers don’t lie.”

Templin himself was a nuclear engineer who built weapons. His partner in his practice has bachelor’s and master’s degrees in chemical engineering. He got into advising after his godfather died unexpectedly without any financial planning, leaving “the classic American horror story,” Templin said.

He helps colleagues who are struggling with integrating tech, but he emphasizes that strategy needs to come first.

“They’re not breaking down what they need to do into manageable chunks and then building processes around it to make it more efficient,” said Templin, who also leads The Intro Machine, which help professionals build introduction-based businesses.

When Templin started in the business 25 years ago, the life insurance application was eight pages and clients signed one or two places. Now, it’s basically a book. But an advisor should not just throw the book at clients.

Advisors should streamline that material within their presentation so they can minimize their time input.

“Instead of dorking around on the computer and taking two hours to do this, do it in 20 minutes,” he said. “Then you can spend 20 minutes prospecting and getting more introductions, and 15 minutes practicing, so that you then increase your skill set, so that it generates more money for you on it.”

“You’re being more efficient with your time and you’re building replicable and repeatable processes that then allow you to be more effective,” Templin said. “So you can do more and more and reach out and help more people, and the side effect for that is, you make more money.”
Templin describes his own process as a blend of “the Northwestern Mutual Granum system and your traditional engineering four quadrant rotation diagram.”

That means his practice:

» Sets an agenda for every single meeting to ensure they control the flow of information and don’t miss anything with the clients. “Also, it’s very good from a compliance point of view,” he said. “Then we just do what needs to be done in terms of documentation, application, review, follow-up, what have you.”

» Meets with an initial client and talks to the person about what’s important. They use Zoom and Lifesize, a video platform that Templin says has better security.

» Comes to a financial planning agreement.

» Continues to gather data, analyze it, and develop and recommend solutions.

» Documents each meeting, even if it is multiple meetings. “We will use Copytalk to basically download our brain into our CRM,” which is Redtail.

» Follows the checklists generated by the CRM.

“That way I can go back to a meeting six months later and be able to reconnect with all of it,” Templin said. “One of the things that you understand from a psychological point of view is, when you review your notes from the meeting, it actually rekeys memory. So, you’ll pull some things that were hidden a little bit that you might not remember.”

Templin said at the center of it all is the CRM. He understands why someone who is within 10 years of leaving the business would not incorporate a CRM at this point. But everyone else …

It is also a serious compliance issue when advisors need to show the documentation demonstrating why they made their recommendations.

“It’s essentially like having an alarm on your phone that goes off 15 minutes before you have to pack up and head home for your kid’s birthday or go to your doctor’s appointment,” he said.

A CRM For Any Budget

Ken Leibow, the CEO of InsurTech Express, was a bit surprised by how many of the survey respondents did not have a CRM. But he was a little more surprised by the CRMs that the others had.

Specifically, he was surprised that the top CRM was Salesforce, which is a more general system. He expected to see more of the CRMs that are designed specifically for finance or insurance.

'“Two things about Salesforce,” Leibow said. “One is you have to do a lot of setup work yourself. And two, it’s usually pricier.”

He pointed out that there are many systems available, usually on a retail or enterprise basis. Enterprise would be available from an organization, such as a brokerage general agency. Retail is “just basically you give a credit card and you pay a monthly fee.” Sheryl Hickerson knows full well that some people are still tech-averse. She has been in the advising business for more than 30 years and is the vice president of business development at Highland Capital. But she is probably best known as the leader of the networking organization Females & Finance.

“I think this is more men,” Hickerson said of people avoiding tech. “I find some that are still putting binders together. I’m like, ‘A binder? What’s with that? … Everything’s on a cloud.’”

Women, on the other hand, are often more willing to dive in and ask for help when they need it, Hickerson said. Women are also looking for ways to differentiate themselves in a male-dominated business.

Younger people in the financial services space also tend to be more current with tech. The insurance industry in general has been trailing finance in tech.

For example, online applications and signatures could have been widely available much earlier, she said.

“Think about what a different world we’d be in today,” Hickerson said. “We wouldn’t still be doing the ‘You missed a signature’ world.”
But adoption does not just happen by itself, she said. People and organizations have to be taken to the water and told to drink.

“The good thing out of 2020, out of this pandemic, is it has pushed people to use technology,” Hickerson said. “They have to.”

Mindset is a key element. Hickerson said she sees greatest success when people look at it as an investment rather than a sacrifice or a risk.

“We’re risk managers. I mean we’re risk-averse for the most part,” she said. “But the ones who do really well are not. They’re willing to take a chance. I was talking to an advisor up in Connecticut and he said, ‘Yeah, we spent $100,000 and bought this magnificent digital press.

Now we’re busting out marketing materials and doing all this stuff.’ He saw it as an investment. It wasn’t a risk.”

It is not only with the big spends, but with everything. People who are curious, flexible and resilient have been flourishing in an otherwise difficult time.

“The ones who are investing are very pro-risk,” she said. “Right now, the whole thing with 2020 and the ongoing quarantine, those who were the invest-in people, it was nothing but a thing. It was like, ‘Yeah, I got to figure out how to adjust Zoom. I need to change this room and put new lighting in.’ They were all looking forward to making it a better experience.”

The risk-averse were not so eager.

“They were, ‘I don’t want to take that picture off the wall. I don’t care if it offends anybody. I don’t want to change. I don’t want things to change,’” she said. “There is an enormous amount of hope that we’re going to go back to the way things were. I’m telling you that’s never happening. You know why? Because when our 80-year-old parents can learn how to get on Zoom, they’re never driving down to your fancy office with your fluffy pillows on your couch again. Never.

Agent Tools For Prospecting, eRetail Sales And Applying For Insurance

What Will Happen To The Tax Laws After The Election?