I have been thinking a lot about golf this year, and not just because I didn’t play at all during 2020.

Golf is such a wonderful game, for a variety of reasons that would fill a half-dozen columns. No other sport offers its players myriad stunning and challenging playing fields. It’s a hobby that simultaneously frustrates and relaxes. Many golfers struggle for years to make the slightest improvements in their game.

For several years in my 30s and early 40s, I traveled annually on a group golf trip to South Carolina. The variety of spectacular courses turned the weeklong trip into an annual male-bonding trip that I looked forward to for months.

One of the guys who joined those trips was a stickler for the rules of golf. You do not curse on the course or dig into the greens. You definitely do wear a collared shirt and you defer to faster players. My friend was a walking professor of golf etiquette.

It was on one of these trips — probably the first one, to be honest — that my on-course temper tantrums ended and I became a respectable golfer (more or less). You could say that I was shamed into submission.

How bad were my temper tantrums? Once I was playing golf in a casual foursome when I hit a very poor tee shot. I turned and threw my 5 wood into a nearby tree, and the tree didn’t give it back.

I stood there feeling about six inches tall as my friend extended his own club high into the branches and knocked my 5 wood from the tree’s clutches.

After this phase passed, I grew to appreciate the sportsmanship that is inherently a part of the golf experience. It’s not about simply wearing the right clothes or refraining from launching your equipment. It really is about being part of a shared experience that goes back to the foundation of the sport in Scotland.

It’s about showing respect for your opponent, for the venue and for the entire history of this great game. Finally, it’s a passageway to a world where undetected deception isn’t tolerated. Your opponent could be all alone when he notices his ball move and he calls a penalty on himself. Who does that? Golfers do.

After a year when golf was put on the back burner by many of us, we all could use a refresher on the unwritten rules of golf etiquette. Here are a few important ones.

1. Keep it moving. A typical round of golf takes about four hours, and that is with a good, steady pace. Do not make it longer by being a slow-play golfer. Or else those invitations to play golf will soon start drying up. Mostly, it’s just common sense. If you lose a ball, take a quick look for it and then move on. You don’t need six practice swings before every shot. You get the idea.

Oh, and you will make friends if you let faster groups play through. Smile and compliment their shots while they do.

2. Practice good manners. Don’t talk while someone is taking a shot. Keep your eyes on all tee shots so they can be found quickly. If a fellow golfer is struggling, be that positive friend who reminds them that a bad day on the golf course is still better than the best day in the office.

Manners around the green have their own category. Be sure to fix all marks left by your ball.

Stand behind or off to the side of anyone who is putting, and never, ever walk between someone’s ball and the cup. In fact, a great habit upon approaching the green is to identify the locations of the balls.

3. Mind your golf cart. If you’ve ever played with someone who drives the golf cart all over the course, you know how annoying that can be. Often, courses will limit the cart to the path only. Be on the alert for the signs. If you are allowed to drive on the fairways, take crisp 90-degree angles across them. Around the green, park on the path (or just off it), and make the cart inconspicuous.

4. To imbibe or not to imbibe? In the summer of 2019, I played in a charitable golf outing with a young friend who had three Miller Lites before 10 a.m. He was fun, well-behaved and most definitely relaxed throughout the day. (Pro tip: Plan on a round to take five hours or longer if it’s an outing.) I’ve seen other golfers turn rude and offensive after two beers.

For a long time, I did not mix alcohol and golf. I was a very serious golfer, usually too serious, and I played to score low and beat my opponent. When I began mixing a beer or two with my round, I found myself more relaxed and focused on having fun. If you drink alcohol, find your right balance on the course.

5. Turn off your cellphone. If you can’t turn it off, at least turn the volume down. And do you really need to take that call? This one needs no further explanation.

6. Dress your best. Everyone knows that collared shirts are required on the golf course. Don’t pay any attention to that slick, half-turtleneck shirt Nike created for Tiger Woods. He’s Tiger Woods, and he can wear whatever he wants.

Beyond the etiquette of it, here is your chance to have a little fun and a lot of style. Designers such as Peter Millar, Boss, Nike and so many others have created fashionable golf wear that will turn heads on the links. And it can’t hurt to test the “look good, play good” theory, right? 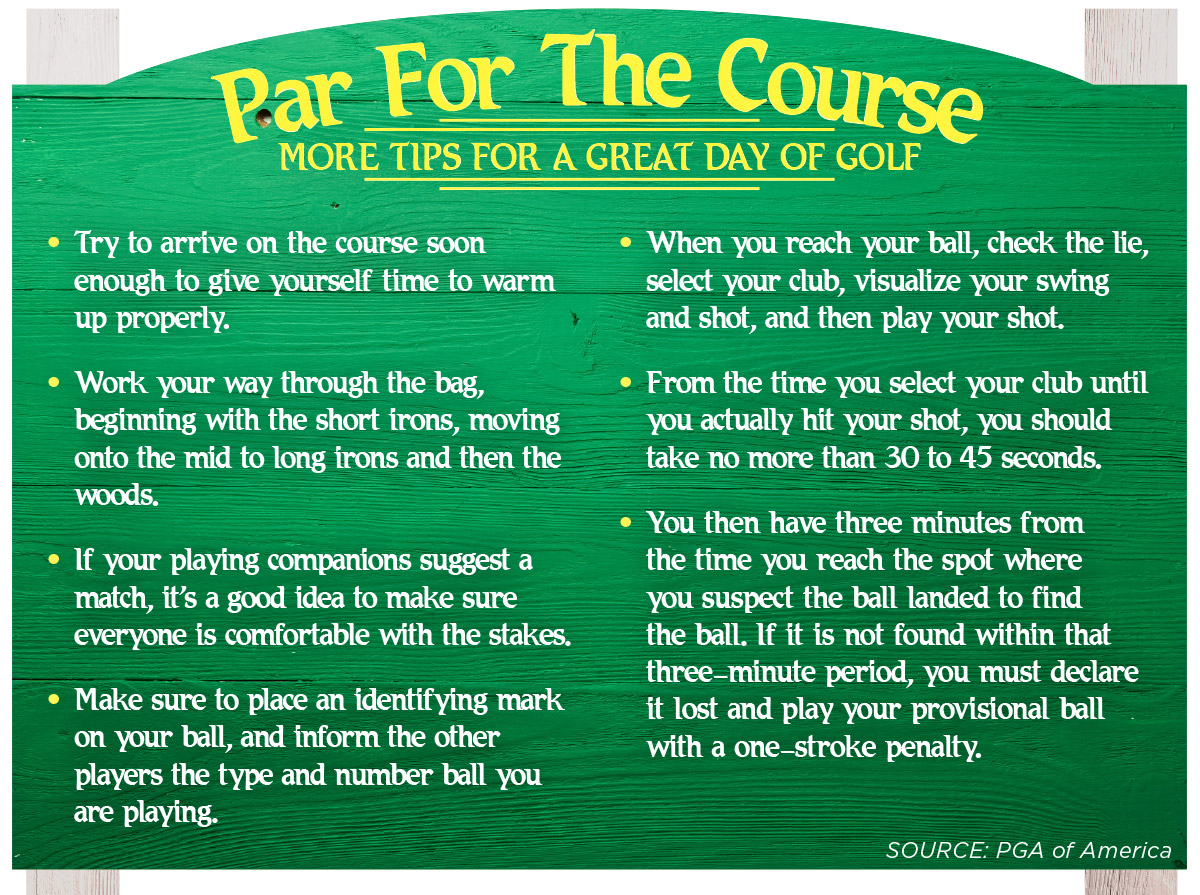 Ask For Help, Have Fun

Common sense is the guiding principle in many on-course interactions. I had been playing golf for many years before I played a course with a starter and a caddy. I looked to friends for guidance on things such as tipping and other formalities.

Golf is a wonderful game made better when you fit in with the norms for course behavior. Have a great season on the links!