The U.S. life insurance industry is on track to post its fastest premium growth in nearly 20 years, according to S&P Global Market Intelligence Report.

Released early last month, the report said strong consumer demand during the pandemic and a tailwind from a 12% overall expansion in premium sales in the third quarter of 2021 has readied the industry for a record-breaking 2021.

The Market Intelligence Report said life insurers could see at least 6.5% growth in “premiums and considerations” for the full year if volume held steady. Growth rates last exceeded 6.5% in 2011. However, should the final sales for the fourth quarter be 5.8% or higher, it would match or better the industry’s 2006 outcome of 8.1%, a number the report said is achievable. “The numbers did catch us by surprise, a bit,” said Tim Zawacki, the lead analyst on the report. “The individual life business has been strong through the course of the year, and we anticipated catalysts earlier in the year in COVID-19 relief and changes to the IRS code that made permanent life insurance more of a viable investment option. There’s a lot of money out there looking for a place to go, whether it’s for yield or tax advantages or whatnot.”

But for a mature industry such as life insurance, Zawacki said, anything above low single-digit growth rates is atypical and significant.

“There hasn’t been a lot of evidence or instances of that occurring historically,” he said. “If you look back, there have been changes to various mortality table things that tended to spark sales. But I think the industry is really poised for a banner year for the life business.”

Annuity lines and regular life business posted the strongest growth in the third quarter, Zawacki said. The volume numbers benefited from the highest year-over-year growth rate in other accident-and-health premiums since the third quarter of 2017. The pace of expansion in group annuity premiums and considerations ranked third highest of any of the quarters in the past decade, trailing only the fourth quarter of 2012 and the first quarter of 2020. 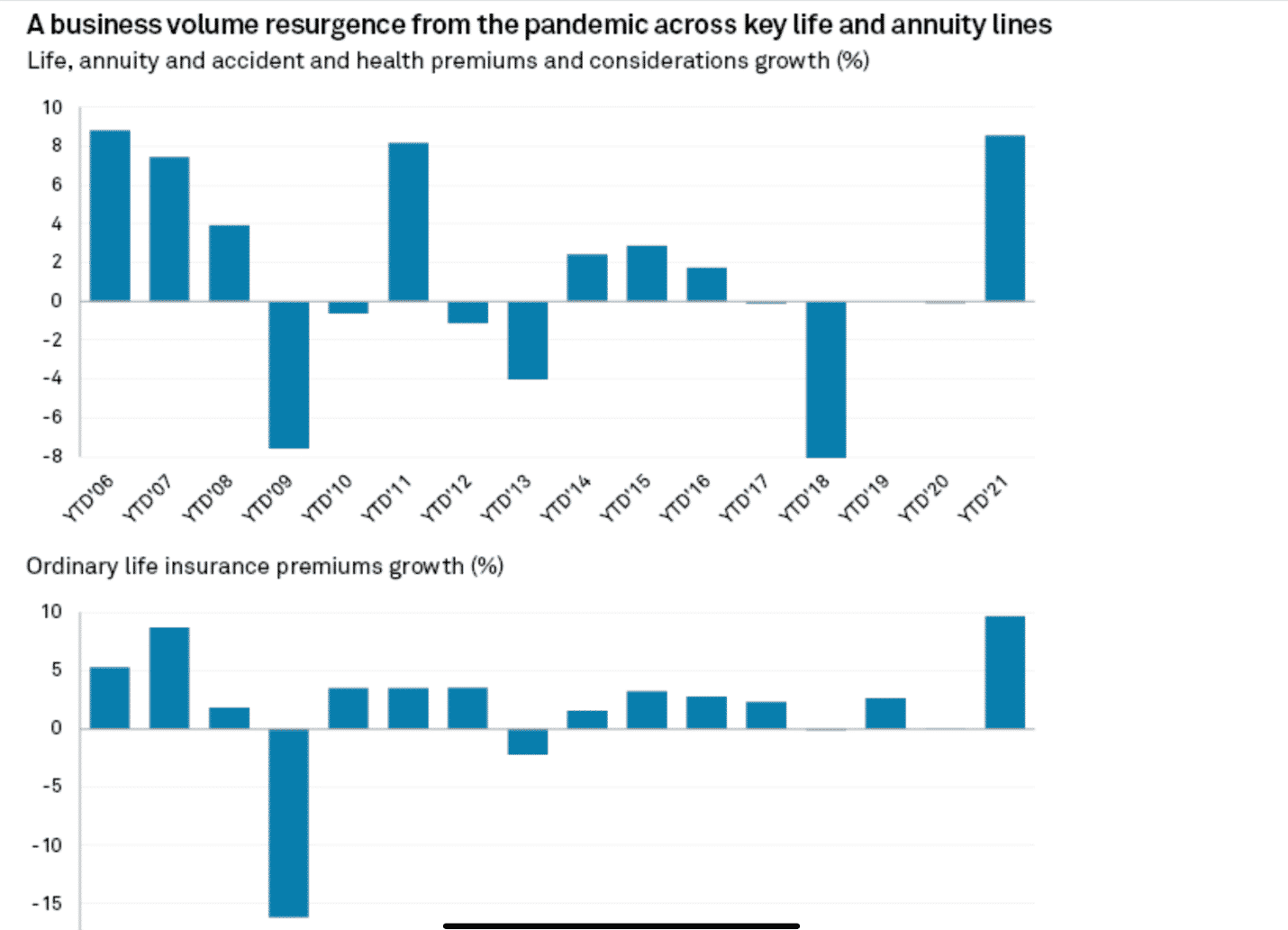 Data from a Secure Retirement Institute study showed that third-quarter 2021 pension risk-transfer sales hit their highest point since 2012. Sales surged to $15.79 billion from $4.60 billion in the third quarter of 2020. As such, they exceeded the previous post-2012 quarterly high of $13.75 billion in the fourth quarter of 2020.

“Prudential Financial inked two landmark pension risk-transfer transactions in 2012 that pushed sales volume to what would appear to be an unapproachable peak of $34.58 billion,” the S&P report noted.

"Never mind the fact that stock market is high, interest rates have bounced off their lows and so it feels like a good time to unload your plan," said Athene Holding President William Wheeler.

Together, the domestic life units of Athene and Prudential combined to post a year-over-year increase in group annuity premiums and considerations of $13.08 billion in the third quarter, a period during which the business volume in the line for the rest of the industry shrank by 11.4%.

Nevertheless, Wheeler is optimistic about the prospects for the pension risk-transfer business both in the near term and the long term.

The one downside to the 2021 numbers is that the industry will be hard pressed to match that expansion in the new year.

“The figures mean it’s going to be much more difficult to compare in 2022,” Zawacki said. “This industry has had a good run of success that goes back to the fourth quarter of 2019. So it predates the pandemic. And so being able to stay in that sort of growth pattern with a mature business is going to be challenging.”

Choir Launches With The Goal Of Increasing Conference Diversity