The Federal Reserve’s strategy of slowing down spending is apparently working as investors grow more anxious about inflation, according to a recent survey.

The State Street Global Advisors Inflation Impact Survey found that half (49%) of investors believe inflation has not peaked and 47% of investors said it is causing them stress and anxiety. Two-thirds (67%) of investors are worried about the economy over the next 12 months. More than half (59%) worry about their own investments eroding. The latest Consumer Price Index reading from the Labor Department this morning seems to bear out the inflation sentiment. After a month of no growth, inflation perked up slightly last month. The CPI increased 0.1% from July to August after no change the previous month. Perhaps more troubling is the core CPI, which strips out energy and food – typically the inflation leaders as of late. Even so, that index grew 0.6% over July, the first increase in six months.

The Fed is expected to raise its prime rate another 75 basis points this month as inflation remains stubbornly high, even edging up slightly despite aggressive rate increases this year.

The Wall Street Journal reported that this morning’s data shifted analysts’ inflation expectations for the year, ratcheting up their projection to 2.8% over the next 12 months. The Dow Jones index dropped 800 points on the CPI news.

In the State Street survey, investors showed that they have already responded to inflation, with half (51%) cutting back on discretionary spending. More than a third (35%) spent less on vacations or delayed a major purchase, with 29% even cutting back on essential expenses such as food and gasoline.

The firm found some encouragement in the data because investors are sticking with their plans, according to said Brie Williams, head of Practice Management.

“As Americans work to defend themselves against the corrosive effect of inflation on their finances, we’re encouraged to see the majority are making tradeoffs in discretionary spending, rather than sacrificing contributions to their long-term savings goals,” Williams said. “Notably, less than one-quarter of Americans were willing to curtail contributions to their retirement savings or their child’s education savings, which demonstrates a firm commitment to their long-term financial goals.” 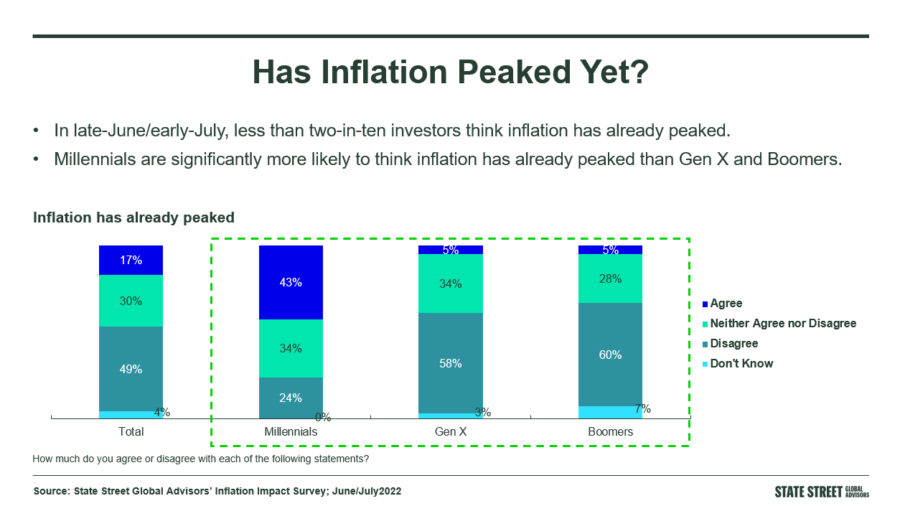 Gen Xers are also most anxious (59%) about their ability to afford retirement, compared to 31% of boomers and 41% of millennials.

Gen Xers are making changes in light of inflation, with 61% cutting discretionary spending and 41% cutting essentials such as groceries and gas, and 39% delayed a major purchase such as a vehicle.

Williams said she expects these changes will be long-lasting as these practices become habits into the future.

“Making prudent financial decisions during times of uncertainty could make committing to a budget or investment discipline easier when the economy improves,” Williams said.
Another lasting effect might be on mental and emotional stability, according to an American Psychiatric Association Healthy Minds survey. Even back in June, 90% of Americans were anxious or very anxious about inflation, with 50% concerned about loss of income.

Healthline reported that this anxiety is directly connected to overall health, according to Timothy B. Sullivan, chair of psychiatry and behavioral sciences at Staten Island University Hospital.
“If you look at scientific measures of social stress or social vulnerability,” Sullivan said, “the factors that are associated with increased risk of ill health are all affected by financial stress.”

New life insurance premium up 11% over first half of 2022, LIMRA finds

How end-to-end automation can revolutionize the insurance industry