Additionally, net income in the quarter reflects $868 million of income from business reinsured to third parties, the insurer noted. Jackson National shares were up nearly 18% at the close of the markets Thursday.

Jackson ranked No. 1 in overall annuity sales in LIMRA's year-end 2021 rankings with $19.3 billion in sales. The company's historic strength is in variable annuities, which have been in a sales slide due to market conditions. Jackson's sales have declined proportionally, forcing the company to adjust its product mix.

"Jackson's variable annuity sales of $2.9 billion represent a quarterly decline that is consistent with industry trends," said Laura Prieskorn, president and CEO of Jackson. "We remain committed to traditional variable annuities as a valuable consumer option that provides choice and customization. Our fixed and fixed index annuity sales are growing while continuing to reflect our pricing discipline."

The insurer noted an increase in its annuity sales without lifetime guarantees: 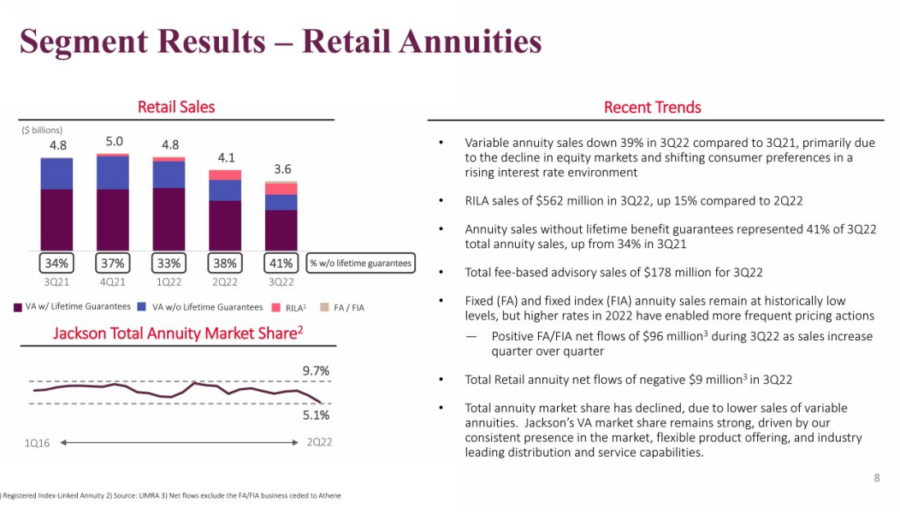 Likewise, Jackson is pushing growth to the registered investment advisor channel through its growing relationship with Halo, a platform that provides advisors with fee-based annuity options.

"After a successful first year of offering fee-based FIA and RILA through Halo, we expanded our array access to retirement solutions by adding variable annuities to the Halo platform," Prieskorn said. "RIAs remain an underserved channel and annuities provide a long-term retirement income and savings solution that can complement existing portfolios."

In its overall annuity segment, Jackson reported pretax adjusted operating earnings of $364 million in the third quarter, compared to $527 million in the year-ago quarter. "The current quarter was negatively impacted by lower fee income due to reduced AUM, lower limited partnership income relative to the prior year period, partially offset by lower DAC amortization and lower operating expenses," the release said. LIMRA is forecasting continued strong market share for protection products, such as fixed and fixed-indexed annuities. In response to an analyst's question, Prieskorn said Jackson is keeping one eye on interest rates going forward.

"We certainly have been paying attention to the rising interest rates and have taken the opportunity for pricing actions across our entire annuity spectrum, which does include fixed and our fixed indexed annuity offerings," she said. "So we have seen an increase in sales in those products. But our proven pricing certainly looks to strike a balance between our profitability targets and good consumer values."

How big data can combine with AI to insure older vehicles