The headlines on 2023 tax and retirement policy changes are not quite as big as President Joe Biden had hoped, but one issue — inflation — is is driving significant developments that advisors will want to address with clients.

It’s not all bad news, either.

Inflation proved stubborn throughout 2022, despite the Federal Reserve’s best efforts. The year is ending with inflation affecting nearly all aspects of the U.S. economy.

The inflation fallout is being felt across all age groups and has massive ramifications for retirement planning.

While the rate hikes might succeed in bringing inflation back to the Fed’s 2% target, it might also cool the jobs market. The unemployment rate could rise as high as 6% next year, according to a recent Deutsche Bank forecast.

Likewise, rate hikes could throw the economy into a recession in 2023, say executives such as Goldman Sachs CEO David Solomon and JPMorgan Chase Co-president Daniel Pinto.

Although that news is certainly bad for clients, they are getting some corresponding good news in the form of inflationary adjustments to both tax filing rules and Social Security.

Social Security and Supplemental Security Income benefits for approximately 70 million Americans will increase 8.7% in 2023 in a historic cost-of-living adjustment.

While Biden did not get many of the tax code changes he campaigned on — thanks to a sharply divided Congress — there is still plenty new to review with clients.

For starters, in October, the IRS unveiled higher federal income tax brackets and standard deductions for 2023. The agency also boosted the income thresholds for each bracket, with the new limits applying to 2023 for tax returns filed in 2024. “We’re seeing a much larger increase in the standard deduction than was originally forecast,” said Rob Burnette, CEO, financial advisor and professional tax preparer at Outlook Financial Center in Troy, Ohio. “We’re going to see deductions change. For example, the gift tax exclusion projected to be $15,000 is going to be $16,000. That means you can give $16,000 to someone and not have to pay gift tax because whoever receives it doesn’t pay any income tax on it.”

Some other important tax filing changes announced by the IRS include:

» For the taxable years beginning in 2023, the dollar limitation for employee salary reductions for contributions to health flexible spending arrangements increases to $3,050. For cafeteria plans that permit the carryover of unused amounts, the maximum carryover amount is $610, an increase of $40.

Another tax change — the sunset of the expanded child tax credit — could be saved by Congress in its December “lame-duck” session. The credit was significantly expanded in 2021 by the American Rescue Plan so families could receive up to $3,600 per child under 6 and $3,000 for those ages 6 to 17. But the changes were made for just one year and will be reduced back to $2,000 per child in 2023 unless Congress acts.

“I don’t know if there’s a lot of partisan pushback from Republicans on a child tax credit,” Burnette said. “So that’s something that likely could probably [pass Congress].”

One tax that Biden very much wanted to change is the estate tax. Biden’s 2020 platform called for returning estate tax to the “historical norm.” The 2017 tax bill signed by President Donald Trump doubled the amount that individuals can pass on before the 40% estate and gift tax kicks in. In 2022, that number is $12.06 million.

Early on in his administration, Biden proposed a new plan that left the estate tax threshold alone but eliminated the “step-up” in basis. 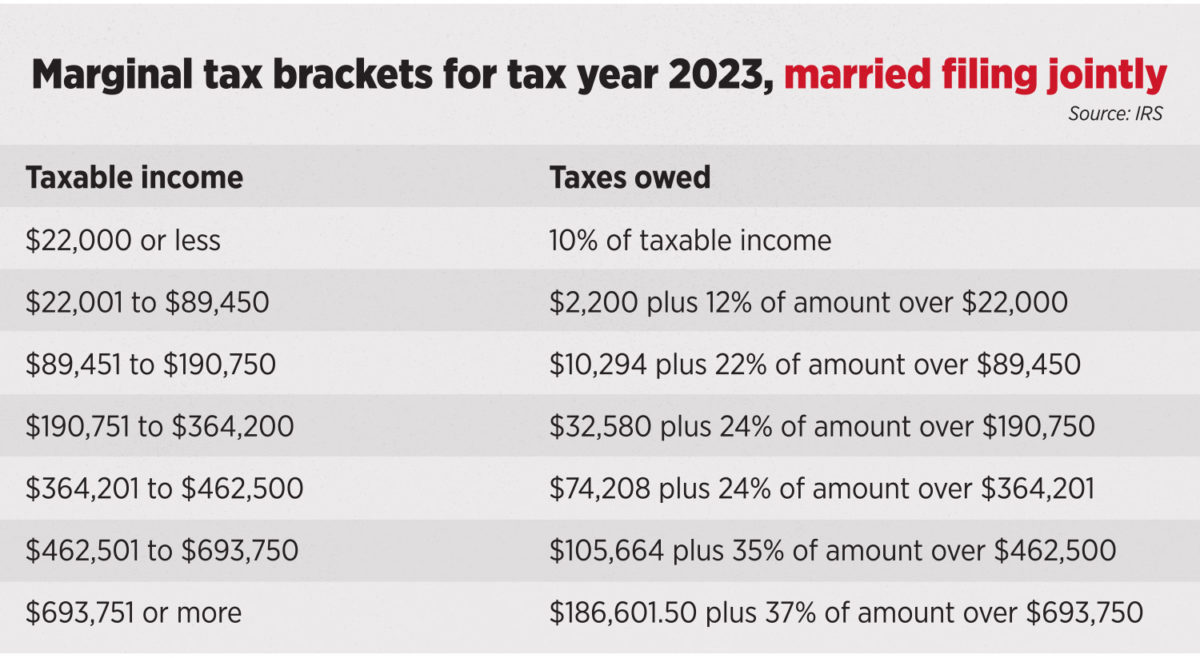 The step-up in basis is a provision in tax law that relates to how assets — such as stocks, bonds or real estate — are valued and taxed after their owner dies. Currently, stepped-up basis allows the value of an asset to be adjusted to reflect the asset’s value at the time that the owner dies rather than the value when it was originally purchased.

Capital gains are taxed when a capital asset is sold for a profit. For example, if shares of corporate stock were purchased for $100,000 and sold 10 years later for $200,000, the $100,000 profit would be considered a capital gain. However, if the owner of a capital asset were to die and bequeath it to someone, the basis of the asset would be adjusted to “step up” to the asset’s current value.

The administration asserted eliminating the step-up basis could generate as much as $100 billion over a decade. Biden’s 2022 budget again proposed elimination of the step-up provision, but his estate tax proposals have yet to gain any traction in Congress.

Even if the estate tax remains unchanged, advisors of high net worth clients need to plan for the future. The current estate and gift tax exemption is scheduled to end on the last day of 2025. After that, the exemption amount will drop back down to the prior law’s $5 million cap, which, when adjusted for inflation, is expected to be about $6.2 million.

In addition, the 40% maximum gift and estate tax rate is set to increase to 45% in 2026. It’s something advisors should keep a close eye on, Burnette said.

“If we’re looking at President Biden and another Democratic Congress, I look for them to accelerate that [estate tax] sunset provision,” he said, “and then jack up everybody’s taxes and change all the deductions and stuff like that.”

Persistent IRS pleas for more funding from Congress finally paid off this summer, when Democrats added $80 billion for the agency to the Inflation Reduction Act.
Fortified with a new funding stream, the IRS is making plans to clear a massive backlog of unprocessed tax returns, upgrade technology that is decades out of date and hire more auditors. As a result, what have been a very low audit rate and a correspondingly high possibility of getting away with an imperfect tax return are likely to change.

Francine J. Lipman is a professor of law with expertise in tax issues for the University of Nevada, Las Vegas. Anyone wishing to get tax planning advice might be too late, she said.

“We’re just now getting done with 2021 tax compliance,” she said during a late-October interview. “Tax professionals have learned to be more professional with their clients, meaning get engagement letters, get retainers, charge what you’re worth and not tolerate last-minute looky-loos who are trying to shop around.

“I think clients need to be aware of that and respect their CPAs and tax professionals and start talking to them now.”

There are some areas where moving parts require a CPA or a tax-focused advisor to help clients maximize their bottom line, Lipman explained. For example, a capital gain rate of 15% applies if your taxable income is more than $40,400 for singles or more than $80,800 for a married couple filing jointly.

“It’s interesting because there’s an interplay between the capital gains tax rates and Social Security,” Lipman said. “You could trigger some stock sales and have a capital gain that is in the 0% tax bracket, but that might cause some of your Social Security to be taxed as ordinary income.”

In other IRS news, the agency announced the largest-ever increase in contribution limits on 401(k) plans and other federal savings programs.

The $7,500 catch-up contribution limit applies to anyone who turns 50 or older in 2023.
Catch-up provisions provide an opportunity for workers 50 and older to contribute more to their retirement savings and especially helps those who haven’t been able to contribute maximum amounts in the past. The pretax contributions also let taxpayers reduce taxable income even further.

“Because all the limits have gone up, it allows folks who are already putting in the maximum amounts to save more and get the tax benefits,” said Evan Press, financial professional with Equitable. “Given inflation has been so high, it’s important for people to save what they can. When it comes time to take money out of these vehicles in retirement, they will need more income to keep up with this higher inflation.”

Those 401(k) opportunities in conjunction with planned Social Security increases give clients a double-barreled approach to boosting retirement dollars. On average, Social Security benefits will increase by more than $140 per month starting in January, the Social Security Administration estimated.

Medicare Part B premiums, deductibles and coinsurance rates are determined according to the Social Security Act. They normally do not go down, explained Jim Silbernagel, creator and host of Real Wealth, an online radio program for insurance and financial professionals.

“Typically, the [Social Security] raises that we’ve been getting have been taken away by the increased premiums in Medicare,” he said. “It’s kind of an unusual situation, where they’re actually getting to keep the raise.”

Four other significant changes to Social Security are coming in 2023:

» An increase in the wage cap.

Forty lifetime work credits are needed to receive Social Security benefits, of which a maximum of four can be earned annually. In 2022, a work credit was granted for each $1,510 in earned income. In 2023, that figure is rising to $1,640, according to the Social Security Fact Sheet.

Only 2% of workers hit the thresholds to claim the full benefit, the biggest being 35 years of earning at or above the Social Security cap.

In 2023, those figures are increasing to $21,240 and $56,520 before any withholding begins. Claimants of full retirement age can earn an unlimited amount with no reduction in benefits.
Election-year politics

A lot will change in Washington before the calendar turns to 2023. Despite the outcome of the midterm elections (which took place after this issue went to press), many of the priorities for the financial services industry are somewhat bipartisan.

One such example is the Securing a Strong Retirement Act of 2022, known informally as SECURE 2.0. It passed the House on March 29 with overwhelming support (414-5).

The Senate followed up with two different versions, the Retirement Improvement and Savings Enhancement to Supplement Health Investments for the Nest Egg Act (RISE & SHINE Act) and the Enhancing American Retirement Now Act (EARN Act), which together will form the Senate’s Secure Act 2.0 package.

While the House and Senate versions differ in the details, both would expand retirement savings for workers. For older workers, the plans would accelerate catch-up contributions to retirement plans.

For IRA catch-up contributions, currently at $1,000, both bills would index the limit to inflation, though the start date is different for each.

When it comes to taking money out of a pretax retirement plan, both versions would delay the first required minimum distribution year to age 75, though the House bill phases in the change, while the Senate bill goes directly to 75.

The expectation is some form of SECURE 2.0 will be sent to Biden by the end of the year, much as the original SECURE Act was passed in late 2019 and signed by Trump. SECURE 2.0 will provide some options for Americans to work longer, if they can, and make greater contributions to their retirement, Silbernagel said.

“That’s something we as advisors really need to be talking to clients about,” he said. “I think one mistake a lot of advisors that are asset gatherers make is they see those 401(k)s and rollover opportunities, and they want clients to retire so they can capture that money.

“But I think you serve your clients much better by making sure they’re in a good position and having a little patience because there’ll be more of the retirement accounts to roll over if we do a good job of counseling our clients.”

A financial odyssey — With Anna Maassel

5 areas analysts predict will challenge the insurance industry in 2023