As the Biden administration considers extending the student loan repayment pause and forgiving some loan debt, some advisors are saying their clients are anxiously awaiting word as inflation roars.

The loan payment suspension was enacted more than two years ago for 41 million borrowers, who save $5 billion a month in payment. The pause is set to expire at the end of August, unless the Biden administration extends it again. The administration is also looking at forgiveness of probably $10,000 in student loan debt, although progressives are asking for more.

In the meantime, borrowers have been able to do things that they have been putting off, such as buying a residence or upgrading their rental, and may become financially stretched as the payment restart looms.

Aaron Clarke, a CFP and AIF located in the Washington D.C. metro area has encountered  clients and friends with up to hundreds of thousands in student loan debt, but people across the income spectrum also have reason to be worried about the suspension’s expiration as real estate prices and inflation have gobbled up some of their financial cushion.

“If you look at the current household income ratios, the current amount that Americans spend on their mortgage alone I think is 31% on average,” Clarke said. “Your total debt expense is supposed to be under 28%. And the reason that they can afford that is because they haven't had to pay for student loans the last two and a half years.”

You're going to bootstrap the country into financial failure because people aren't going to be able to pay their debts off.
— Aaron Clarke, CFP

In the meantime, the economy has become more challenging, with inflation rates at their highest in the past four decades. Clarke used to advise ultrawealthy clients and has turned to making financial education accessible across the income spectrum in a new venture, Gig Wealthy.

“So, my personal problem with turning it back on is you're going to do that on top of inflation,” Clarke said.  “You're going to bootstrap the country into financial failure because people aren't going to be able to pay their debts off.”

The New York Fed echoed this concern not only because of inflation but also because many people in the sectors hardest hit during the recession had a hard time meeting their expenses and saving, according to an analysis done for the Fed by Liberty Street Economics.

“Even with most having an automatic pause on their student debt payments and thereby avoiding delinquency on such loans, student loan borrowers perceived a higher risk of missing a minimum required payment on other outstanding debts,” according to the analysis, citing the younger age of student loan borrowers. “These groups are the ones that experienced the greatest financial hardship during the pandemic, with younger workers disproportionally working in the hardest hit sectors of the economy, seeing larger increases in their unemployment rate, and a lower share of younger workers being eligible for unemployment insurance expansions.” 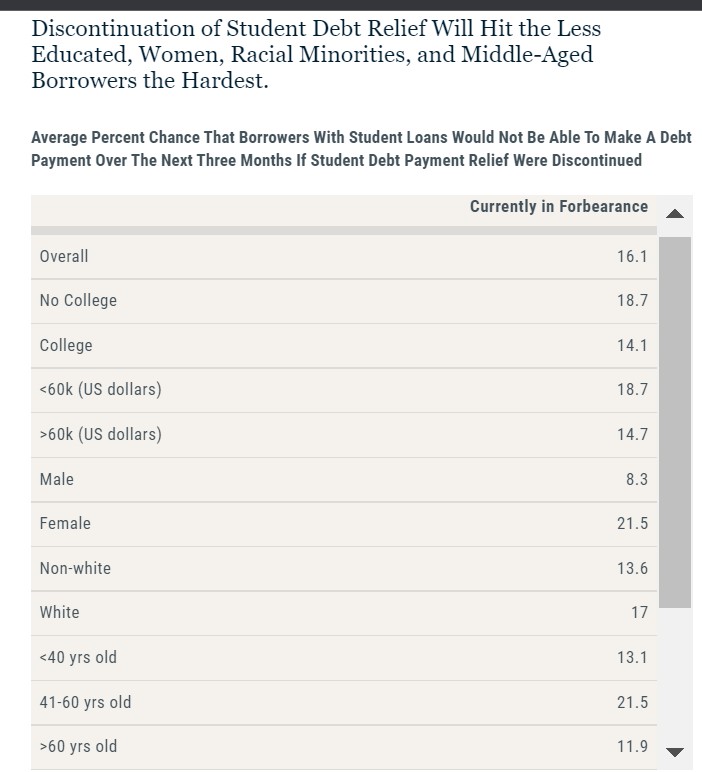 In fact, borrowers who have received other debt relief, such as forgiveness or delay on auto loan or credit cards, were more likely to be delinquent because they are facing overall financial difficulty. Those receiving the other relief had a 23.2% probability of missing a payment, compared to 7.8% who did not receive debt relief, besides student loans.

“This suggests that borrowers who received temporary relief are financially worse off and more likely to have needed the financial support,” according to the analysts. “They remain financially more vulnerable and expect a higher level of financial insecurity in the future.”

Borrowers who used an income-driven repayment plan were less likely to be delinquent, the Fed researchers said. That program allows borrowers to reset their payments based on their income and family size.

That is just one of many options for borrowers, according to Jason Anderson, whose Kansas firm Gradmetrics works with families and advisors in college and student loan planning.

Anderson advises breaking down a repayment strategy to two considerations: Is the overarching strategy to pay off the debt as quickly as possible or to pursue loan forgiveness?

For borrowers considering loan forgiveness, the payments not made during this period still qualify for the Public Service Loan Forgiveness plan, which forgives the remaining balance on direct loans after making 120 monthly payments under a qualifying repayment plan while working full-time for a qualifying employer.

“For these borrowers, purposefully not paying will get them closer to loan forgiveness while keeping money in their pocket,” Anderson said. “These funds can be diverted to other uses, such as a nest egg, down payment, retirement savings, etc.”

For those wanting to pay down the debt, the payment pause can “supercharge” payments toward principal while interest on the federal student loans is suspended, he said. Clients can pay down the highest interest rate loans first, the “debt avalanche” strategy; or build momentum by paying off the smallest balances first, the “debt snowball” strategy.

Anderson said borrowers should be running scenarios on the right repayment strategy, either by contacting a professional, such as a certified student loan professional, or by using tools like the Department of Education's Loan Simulator.

Brittany Mollica is a certified student loan professional with Hilltop Wealth Advisors in the college town of Chapel Hill, N.C., who has clients with student loan balances as high as $400,000, mostly people in the medical field. Those clients sometimes earn more than $400,000 annually, but they can earn a lot less and will really suffer cash flow problems when the payments restart. Balances of $100,000 can be as overwhelming depending on their income, cost of living and family situation.

Mollica is advising clients to hold off repayments until the pause and forgiveness options are worked out.

During the pause, she suggested clients can work with a financial professional to balance paying down debt with other financial goals. They can also reassess their payment plan with an eye to switching to an income-driven plan, or coming off one, before the payment pause is lifted.

Uncertainty is even greater for parents planning for their children’s education. Planning starts when kids are young, before college is even a given in the child’s future. The child may pursue something else or qualify for large scholarships if they go the college route.

“Generally speaking, we make sure our clients are saving enough for themselves first because their children can get student loans if needed, but they can’t get a loan for retirement,” Mollica said. “Then we’ll balance using tax-advantaged ways to save for college, like 529 plans, with more flexible options, like brokerage accounts.”

Kirsten Crane Cadden, a CFP with Warren Street Wealth Advisors in Huntington Beach, Calif., also advises clients not to start payments during the pause. She recommends saving the money for emergencies.

“If a borrower is worried about resuming loan payments,” Cadden said, “I would recommend they start to set aside the equivalent of monthly student loan payment in a savings account now to get back in the habit, prepare their budget and have a cushion if needed.”