A Learning Year That Keeps On Teaching Life Insurers - InsuranceNewsNet

A Learning Year That Keeps On Teaching Life Insurers

Another factor in the decrease in annuity sales became evident during a presentation and panel discussion at the National Association for Fixed Annuities’ annual meeting last week.

Besides low crediting rates and difficulty in selling virtually, consumer uncertainty arose as a factor in Cannex’s polling this year, according to data reviewed by Tomiko Toland, Cannex head of research, during the "The Future of Product Design" session.

The firm happened to have conducted a consumer poll with Greenwald Research in February, before COVID-19 caused widespread closures nationally. Researchers decided to poll again in August to gauge the pandemic’s impact on consumer sentiment.

It was clear that the sentiment was anxiety. Consumers are also not as enthusiastic about lifetime income as they were before the pandemic, although a majority saw value in it.

“The perceived value of lifetime income, in addition to Social Security, is always high. It's still high, just to keep that in context. And it's been lower in the past,” Toland said.

In February, 71% thought guaranteed lifetime income was very valuable. But researchers were surprised to see that percentage drop to 63% in August. 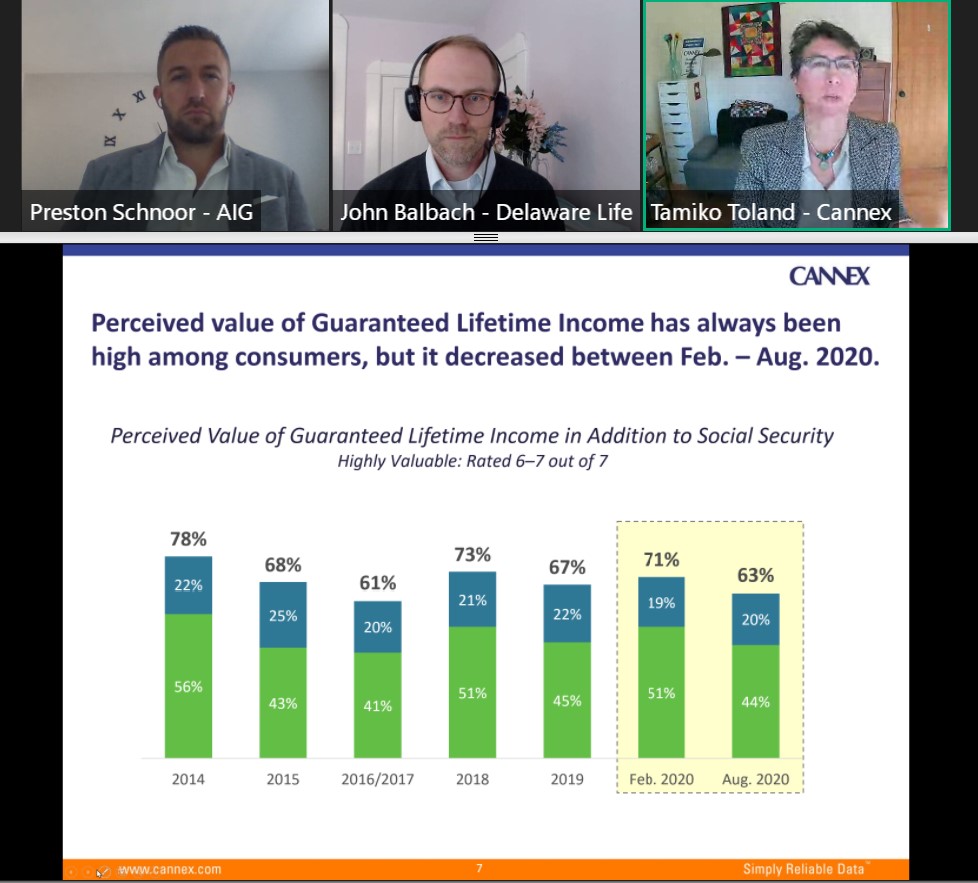 Although many factors likely contributed to the drop, a key one was the effect of market volatility, Toland said. It was not so much that the stock market plummeted early in the pandemic, but that it bounced back quickly.

The good news is that consumers appear to be absorbing the message not to fixate on their 401(k)s and be assured that investing pays off in the long term. So, what’s the bad news?

“Maybe one of the problems is that they may think that this is going to persistently happen,” Toland said. “From my perspective, this has a lot more to do with communications than anything - education to the consumer.”

Despite the slightly cooling consumer ardor for annuities, Toland said the consumers clearly need guaranteed retirement income more than ever.

The two panelists, Preston Schnoor, a vice president and actuary at AIG, and John Balbach, associate vice president of product development at Delaware Life, said they thought that the events around the pandemic spotlighted mortality and the need for life insurance more than the need for a guaranteed lifetime income.

Balbach said clients might have been jolted by market volatility, but the pandemic forced a lot of people to reckon with their own mortality.

“They're seeing a lot of risk on the asset side, but at the same time, maybe they don't think that they need to necessarily plan for as long a retirement horizon if suddenly they see that their rosy 40-year retirement that they may have been expecting could be significantly foreshortened.”

Low interest rates are making it more difficult for companies to offer attractive rates on products, but advisors were nevertheless more enthusiastic about offering them.

“We did see a response to interest rates,” Toland said. “That figure increased from 42% in February to 62% in August, which is a pretty significant increase. I think it says a lot about positioning for advisors on these products.” At the same time, advisors are less confident in their knowledge about the products.

“Between February and August, we saw the confidence ineligibility dropped from 71% to 59%, which is a pretty significant decrease,” Toland said. “We don't really believe that people suddenly forgot how to use these products. But we know that the nature of communications has really changed.”

It was not so much about the product but more about how changes were communicated to advisors and how they were able to communicate the intricacies of the product to prospects and clients in a remote world.

Schnoor acknowledged that adjusting to the pandemic environment has been a learning experience all around.

“I'm hearing from a lot of my peers in the industry about what we can do to decrease the friction with the sales process,” Schnoor said. “Whether that is giving more tutorials online, having FAQs, e-signature, there are plenty of things that I guess we can do from a communications perspective that we've never really had to do before. But we can do that now.”

The Time For Tech

A key area for catching up is in fintech, which the insurance industry has been slow to take up.

“The insurance space as a whole is still very paper-heavy, far more than perhaps other industries would be,” Schnoor said.

An obstacle to onboarding tech is the advanced age of clients and advisors.

"We've seen repeatedly where maybe we thought we had a good solution in place, and then come to find out we still have some work to do to really polish those things up,” Schnoor said.

That shortcoming was especially acute when COVID-19 restrictions shut down face-to-face meetings. Schnoor said although the pressure might have eased as some places opened, it looks like things will be closing again.

Companies are looking for ways to communicate complex concepts simply yet completely in an electronic delivery, he said.

“There are going to be times where it's harder to communicate that information in a digital way than it may have been when an agent could sit next to next to a policyholder,” Schnoor said. “Something that we've been trying to focus on, even before the crisis, but this is really brought to the forefront, is making the communication simpler and more focused. Such that it doesn't require as much on the page and it is just focusing on putting the most important, most salient things on the page so that they do jump out on their own without requiring maybe some of the handholding that was there before.”

Athene Execs: Looking For Deals, But Out On American Equity