Policygenius: One In Five People Think Their Partner Is Bad With Money - InsuranceNewsNet

Policygenius: One In Five People Think Their Partner Is Bad With Money

One in five people in a relationship says their partner is financially irresponsible, according to a new survey from Policygenius, the nation's leading online insurance marketplace.

These people are over ten times more likely to break up over money issues than people who say their partner is good with money.

"Our new survey findings support the notion that money issues can cause relationship issues," Hanna Horvath, data analyst and personal finance expert at Policygenius, said. "This year's results also echo what people said in our survey last year. Not talking about money can exacerbate conflict between couples."

"What you don't know about your partner's finances can hurt you," Patrick Hanzel, a CFP® and advanced planning specialist at Policygenius, said. "No one wants to be blindsided by their partner's bad credit score or outstanding bills. As scary as a money talk might seem, every couple should aim to have it sooner rather than later."

Policygenius' survey is based on responses from a nationally representative group of 2,005 adults in a relationship. It was conducted through Google Surveys from August 21 through August 30, 2019. You can read the full report here.

About Policygenius: Policygenius is the nation's leading online insurance marketplace, with headquarters in New York City and Durham, North Carolina. We've helped more than 30 million people shop for all types of insurance like they shop for everything else — online. We launched in 2014 and are one of the early insurtech pioneers. We were named one of Inc. Magazine's Best Workplaces for 2018 and 2019. 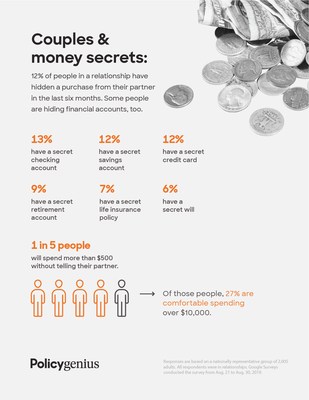 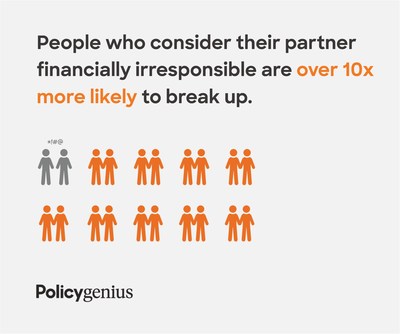