Majority Of Americans Disagree With How Tax Dollars Spent - InsuranceNewsNet

Majority Of Americans Disagree With How Tax Dollars Spent

A majority of Americans not only disapprove of how the government spends their tax dollars, 51% also believe they are overtaxed. This is according to a new GOBankingRates survey aimed at getting to the bottom of how Americans view taxation as well as how they want their tax dollars to be spent. 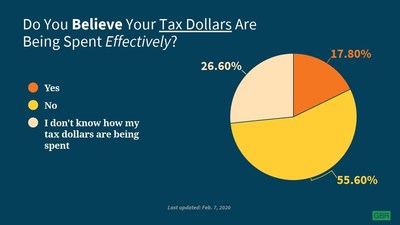 Whether it's balancing your checkbook at home or the government's allocation of tax dollars for programs and services, budgeting comes down to priorities. GOBankingRates' survey produced some rather interesting takeaways on where Americans believe their taxes could be more effectively spent.

Here are some of the key findings from the survey:

GOBankingRates' findings show a majority of Americans are not pleased with how much they're being taxed, and a recent Tax Foundation report1 shows Americans spend more money on taxes than food, housing and clothing combined.

"It may not be all that surprising to hear most Americans don't approve of how their tax dollars are spent," said Cameron Huddleston, award-winning personal finance writer for GOBankingRates. "However, it's important to note that the survey highlights that a significant percentage of taxpayers -- 27% -- don't even know where their tax dollars are going. This lack of knowledge about how their money is being used might be contributing to a sense that it's being used ineffectively."

GOBankingRates surveyed more than 1,000 people from across the U.S. who planned to file a tax return this year.