Households with $5 million-plus in investable assets grabbed over 80% of the COVID market runup, while mass affluent households with $100,000 to under $500,000 declined in number over the same time period, according to a new market sizing report by market research firm Hearts & Wallets.

The Portrait of U.S. Household Wealth: Essential Facts for Sizing Target Markets in an Era of Growing Wealth Concentration analyzes data on consumer households and the assets they control by age, wealth groups and lifestage.

Rich Get Richer — And Older

These assets are heavily concentrated among ages 55 to 74 because most households with $5 million-plus are in this age group. These older, wealthier households control $40.2 trillion of the $68.3 trillion, or nearly two thirds (59%) of all U.S. retail investable assets. The 1% of U.S. households who are older (ages 55 to 74) and wealthy ($5 million-plus) control 32% of all U.S. retail investable assets.

The Portrait report draws from government databases, including the Federal Reserve Financial Accounts of the United States Flow of Funds, U.S. Census Bureau Population Estimates and Projections and the Survey of Consumer Finances. 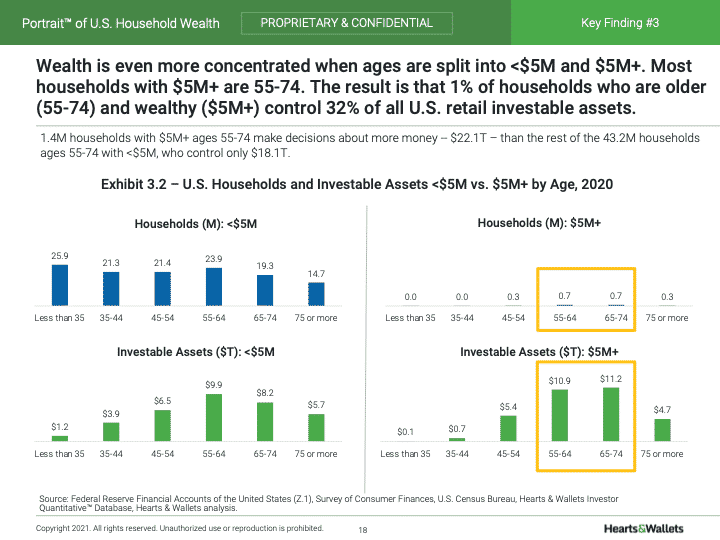 The analysis also uses the Hearts & Wallets Investor Quantitative Database, with over 100 million data points on consumer buying patterns from over 60,000 U.S. households to adjust data from government sources within the report for insights valued by saving, investing and advice executives. The Portrait report is the foundation for Hearts & Wallets’ sizing segments of U.S. retail investors and demand for solutions.

“Wealth groups often referred to as mass affluent took a major hit over the past 18 months as the COVID market runup polarized wealth concentration in America,” Laura Varas, CEO and founder of Hearts & Wallets said. “Simplified investment solutions could encourage the mass affluent to engage with the capital markets.”

“A common myth is that inheritances will go from Boomers to Millennials, when the reality is the majority of wealth transition will go from the Silent Generation to their Gen X heirs,” Amber Katris, Hearts & Wallets Subject Matter Expert, said. “Older households and their families can benefit from support to have difficult conversations about finances and from financial solutions to support aging family members.”