The performance of a lifetime — With Scott Thompson – InsuranceNewsNet

The performance of a lifetime — With Scott Thompson

When you see Scott Thompson on stage speaking at a Million Dollar Round Table event, you would have a difficult time believing he once was a shy kid. Thompson is a financial advisor based in Oakmont, Pa.

During his high school days in Florida, Thompson found that performing in plays helped him overcome his bashfulness and allowed him to bask in the spotlight.

But his father, who spent much of his life in the U.S. Air Force, had other ideas for his son. He hoped his son would follow his footsteps into a military career.

“I had all the nominations lined up for the U.S. Air Force Academy. But then, I finally said, ‘Nope. I don’t want to fly a plane. I want to be an actor.’”

Thompson said his father wasn’t happy with the decision but supported it the best he could.

After two years studying theater at a junior college in Florida, Thompson moved to California to study at San Francisco State University. An acting teacher gave him some advice that would change his career direction.

“The teacher told me point blank, ‘In today’s day and age, you need to be what they call a triple threat. You have to be able to sing, dance and act.’ I was OK on acting. I could dance. But I could not sing. So my teacher asked me, ‘Why don’t you learn theater technology?’ And that’s when I learned stage lighting and design.”

After graduating from college, Thompson returned to Florida and married his high school sweetheart, Dottie, who is a singer.

“We did a lot of local community theater, but I had to get a real job,” he recalled.

He and Dottie formed an entertainment company called Side by Side Entertainment that provided music for weddings and other special events. Dottie sang while he worked as a DJ and master of ceremonies. He even led line dances and other wedding dances for the crowd.

Thompson also worked for an appliance retailer during this time. But when he injured his back while delivering a washer and dryer, he decided it was time to find a career that was less physical.

‘Surprised they didn’t throw me out’

A local insurance company recruited him. “I went in for the interview and told them I’d try it,” he recalled. “But for my first 15 years in the business, I’m surprised they didn’t throw me out.”
Thompson admitted that in those early years, “I didn’t care what I sold or who I sold to as long as I got a paycheck. And I didn’t know what to do other than get a paycheck.”

But he wasn’t satisfied with continuing on that path.

“I finally said to myself, ‘I have to believe in me if I’m going to make a career out of this.’ And I finally started believing in myself,” he said.

But it took more than a change of mindset to move Thompson’s career forward. He said his sister was diagnosed with pancreatic cancer around that time.

“The doctors told her she had between six months and a year to live. She and I were very close. As we went through the next year and a half together, she told me, ‘I’m tired of letting life live for me. I’m going to live for life.’ What she was telling me was, ‘Don’t give up.’ That was my turning point. And I’m proud to say that 20 years later, she is still walking this earth.”

Thompson’s career turned around when he took his sister’s words to heart. He qualified for MDRT each year for 16 years and qualified for Court of the Table for the fourth time this year.
His parents retired to their hometown in western Pennsylvania, and Thompson and his wife eventually moved to the Pittsburgh suburbs to live closer to them. He went to work for a bank, doing investments, then became an independent financial advisor, describing himself as “a one-man show.”

“I’m housed inside a property/casualty agency, and I rent space from them,” he said. “I do everything from soup to nuts. I do life insurance, health insurance, Medicare, investments, disability insurance. I do the whole thing. The agency feeds me referrals from their auto and home insurance customers. But the meetings, applications, all of those things, are handled through me.” 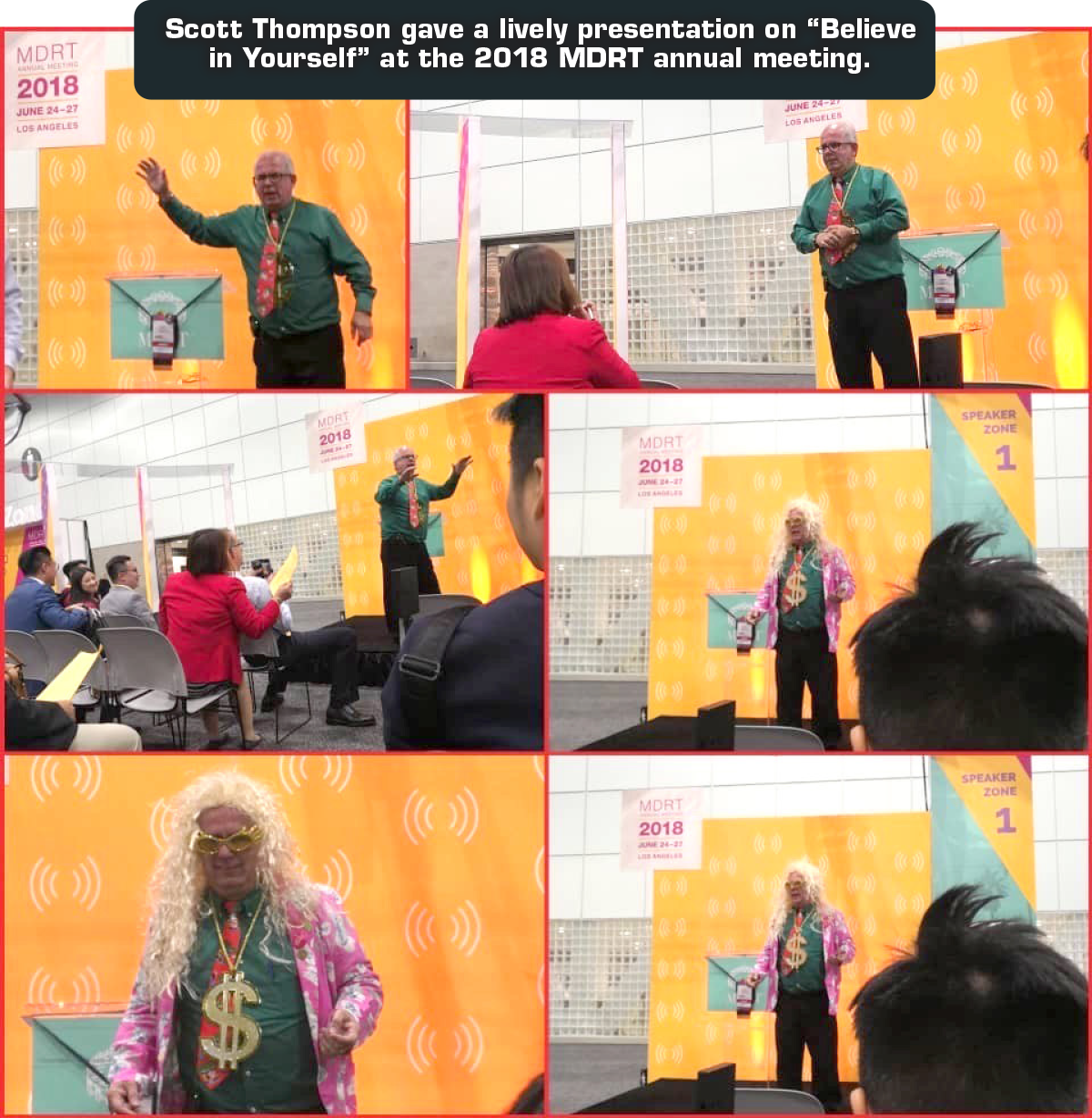 Thompson said most of his clients are age 50 and older.

Thompson said his involvement with MDRT helped to bring out the best in him as he worked to be the best advisor for his clients.

Thompson’s degree in musical theater helped him become a motivational speaker on behalf of MDRT.

“I did a little bit of speaking here and there during my first couple of years in the industry,” he said. “But speaking became too much with trying to work. Later, as I kept progressing at MDRT, people in the organization would say to me, ‘Scott, you have a message. Deliver it.’ I finally said, ‘Maybe I do have a message.’”

He began speaking at some MDRT events and some of the agency leaders who heard his presentation invited him to speak to their own agents. He spoke at the 2022 MDRT Annual Convention in June on “The Four Keys to Success,” a presentation that was geared toward motivating agents to unlock their hidden potential by discovering their true inner selves. He will make his third speaking trip to Asia in August, speaking to agencies in Malaysia, Singapore and Thailand.

Thompson said that his vow to begin believing in himself is the core message that he delivers in his presentations.

‘You can be outrageous’

Thompson doesn’t always wear the standard business suit and tie when he speaks. He lets his theatrical side shine through. His ties are one example.

“To this day, 32 years in the business, you’ll rarely see me wearing a conservative tie,” he said. “Most of my ties are comical. They could have Mickey Mouse, Donald Duck, Tasmanian Devil, whatever on them. Because that’s me.”

He said he wants to show his audience “that you can be outrageous — as long as you are being true to yourself.

“That’s where my theater background comes in, that I can feel comfortable on stage and be able to present,” he said.

In one of his presentations, he appears onstage wearing a gold wig, large-framed glasses, a crazy-patterned jacket and a gold dollar sign on a chain around his neck.

“My message was about being yourself and not trying to become someone else,” he said.

“I would start off the talk with saying, ‘My elementary school teacher told me if I wore a gold wig, I’d be successful. But that didn’t help me.’ And I’d throw the wig off. I’d say, ‘My junior high teacher told me if I wore rock star glasses, I would be the best person on stage, but that didn’t work.’ So I took the glasses off. I’d say, ‘My baseball coach told me that if I wore a wild jacket, people would notice me immediately, but that didn’t work.’ When I took the jacket off, I realized that was me. And what I had left was the dollar sign. So if you believe in yourself, you are going to be successful. Don’t go by what someone else tells you. Go by who you are.”

“A lot of them need help with trying to explain something to a client, trying to understand a particular product, learning how to move forward when they are feeling down,” he said. “I’m there as a sounding board of experience. And from the beginning, I say to them, ‘I’m never going to tell you that my answer is always the right answer or that it’s the only answer. What I’m going to share with you is what has worked for me.’”

Why Marriage Equality Matters To Me And To The Insurance Industry

Take pride in your planning: Serving the LGBTQ community