Principal Financial CEO Dan Houston said he was “awestruck” by the performance of employee benefits in the second quarter as the company continues to delve into the small- and medium-sized business space.

The sector was a highlight in a quarter that Houston characterized in an investors call as challenging largely because of volatile markets, high inflation and macroeconomic uncertainty. Principal Financial had $423 million in earnings, which was down 9% compared to 2Q of 2021. The losses were largely in lower net investment income, fees and other revenue. The company had higher revenues in its Principal Global Investors and Principal Global Investors divisions but lower assets under management. Principal also closed the sale of its U.S. retail fixed annuity and universal life with secondary guarantees business to an affiliate of Sixth Street in the second quarter. Total invested assets decreased $23 billion in the quarter as a result of the reinsurance transaction.

Principal offloaded the lines of business to focus on more profitable segments such as specialty benefits, which saw a record 11% increase in premium and fees over the previous quarter.

The strong labor market has helped the benefits segment by the increase in the number of employees in the program but also increases in employer benefits and matches. Half of the growth was due to new business, Houston said.

“This includes customers moving their benefits to Principal, selling additional products to existing customers, attracting customers that are offering benefits for the first time and maintaining strong retention,” Houston said. “The remaining growth is attributable to employment growth and higher salaries from existing customers.”

The company did see a slight increase in employees’ hardship withdrawals. Houston also pointed to the division’s tech, which won recognition when DALBAR rated the company No.1 in online group benefits administration.

“This award spotlights one of our strategic priorities, customer experience, by listening to our customers and responding with systematic improvements to both digital and human interactions,” Houston said.

Individual life insurance was down 27% (excluding significant variances) compared with the previous quarter, driven by the sale of business lines to Sixth Street. But the business life segment shows the company’s focus on the small- and medium-sized business market with a 76% increase year-over-year. In Principal Global Investors, revenue was up 2.2% over the prior year, but Principal International was the big winner with a 43% revenue increase year-over-year because of higher investment income. But that increase was offset by higher than expected inflation in Latin America, along with other factors. 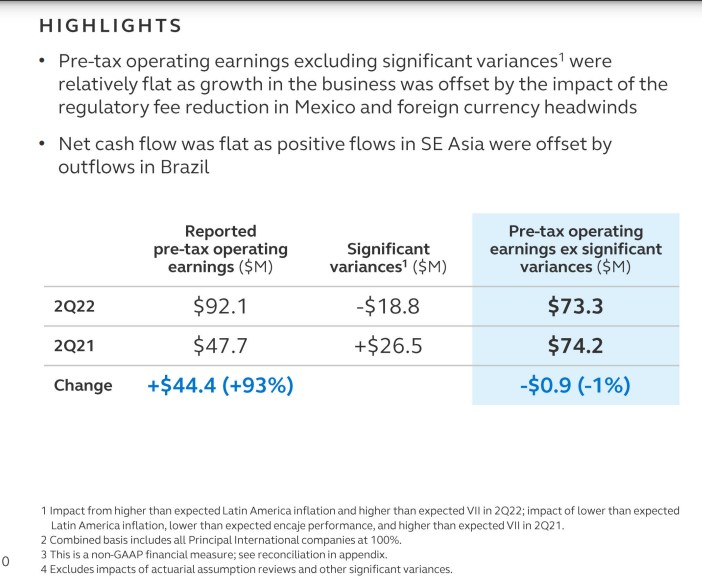 Principal also returned $1.3 billion of capital to shareholders this year.