The Affordable Care Act’s mandates and regulations dramatically increased the cost of individual market health insurance between 2013 and 2019 in almost all states, according to data analyzed by The Heritage Foundation.

A report released by the conservative organization today showed that the ACA more than doubled health insurance costs for individuals and families, with the national average premium increasing by 129% between 2013 and 2019.

However, the report does not look at premiums for 2020 and 2021, in which average benchmark plans on the exchange started creeping downward, the Centers for Medicare and Medicaid Services reported. The average premium for the second-lowest cost silver plan (also called the benchmark plan) dropped by 2% for the 2021 coverage year.

Effects Of The ACA On The Individual Market

The Heritage Foundation’s report states that, beginning in 2014, the ACA imposed a number of mandates and regulations on individual-market health insurance coverage and displaced private markets by creating new government-run health insurance exchanges to sell insurance.

Partly to offset the increased costs of its mandates, the ACA also provided income-related subsidies for plans purchased through those exchanges.

The law’s new mandates and regulations (but not its subsidies) also applied to coverage purchased outside the exchanges, although it did allow insurers to renew older policies (without all the new requirements) for a period of time. However, the design and implementation of the law ended up reducing the availability of those so-called grandfathered plans in subsequent years, as insurers discontinued them — either voluntarily or in response to directives from state insurance regulators.

The Heritage Foundation used data from the annual Medical Loss Ratio reports - which insurers are required to file with CMS - to measure the effects of Obamacare on the cost of individual market coverage.

The foundation’s analysts calculated per-member per-month figures for the average cost of coverage at the state and national levels by dividing total premiums earned by the total number of member months. The resulting numbers, seen in Table 1, show the average monthly premiums that enrollees actually paid for coverage.

As 2013 was the last year of the pre-ACA market, the foundation used that as the base year, followed by each subsequent year for which MLR reports are available (through 2019).

As Table 1 shows, the national average monthly premium paid in the individual market in 2013 was $244, while by 2019 it was $558 — more than doubling from 2013 to 2019. In contrast, over the same period, the average monthly premium paid in the large-group employer market increased by only 29% — from $363 in 2013 to $468 in 2019. For comparison purposes, the foundation applied the same analysis to the MLR data for the large-group employer market. 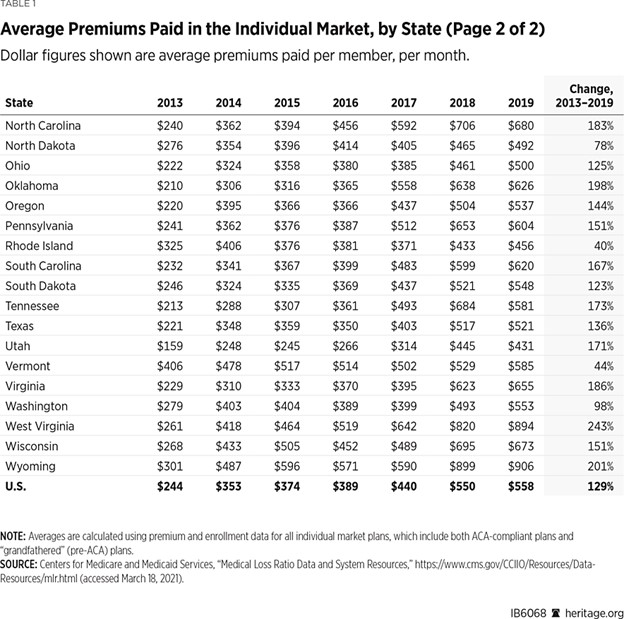 The large-group employer market is not subject to most of the ACA’s insurance regulations. It is also more stable than the individual market, with less customer turnover and less change over time to the risk pool.

By definition, any customer exits and entrances in that market involve groups of 50 or more enrollees, and the diversity of health status among the members of each group means that groups leaving or entering that market have little effect on the composition of the overall risk pool.

Thus, changes over time in average monthly premiums paid for large-group employer insurance primarily reflect system-wide changes in the underlying cost of medical care, such as medical price inflation and the introduction of new therapies.

The changes in monthly premiums for individual coverage under the ACA varied from state to state, the foundation report said.

Similarly, New Jersey, New York, and Vermont had also imposed regulations on their individual markets before the ACA; like Massachusetts, they all had high average premiums in 2013. Those states have experienced only modest increases in average premiums since the ACA’s implementation.

In contrast, states that had previously imposed fewer mandates and regulations on their markets saw higher premium increases under the ACA. In 40 states, the average monthly premium for individual market coverage more than doubled by 2019 — and it more than tripled in five of them (Alabama, Nebraska, Missouri, West Virginia and Wyoming).

The Average Premium Declined In 20 States In 2019

Average premiums declined in all but one of the seven states that implemented Section 1332 waivers in 2018 and 2019, the foundation reported. The waivers, authorized under Section 1332 of the ACA, gave those states regulatory relief from some of the law’s mandates to enable them to better align federal subsidy dollars with enrollee need using state-based reinsurance programs that target funding to the sick with high health care costs.

All four states that implemented their waiver programs in 2019 also experienced net declines that year in average premiums paid — with reductions of 3% in Wisconsin, 6% in Maine, 8% in Maryland, and 10% in New Jersey.

Five additional states implemented Section 1332 waiver programs in 2020, two more did so in 2021, and yet another has received approval to implement its program in 2022.

If those programs have similar premium-reducing effects, the results should be reflected in the MLR data for 2020 and subsequent years, the foundation said.

Despite the increase in premiums since 2013, the foundation said costs can fall if policymakers provide regulatory relief to allow states to redirect subsidies according to the unique needs of the citizens in their states.

The foundation called on Congress to expand the state flexibility and make it permanent.

Conservative groups such as The Heritage Foundation may not be fans of the ACA, but the provision in the law requiring all Americans to buy health insurance has its roots in conservative thinking.

During the Clinton administration, The Heritage Foundation and the American Enterprise Institute were among the conservative research groups favoring the idea that everyone should be required to buy health coverage. The individual mandate was seen then as a conservative alternative to creating a national health plan or forcing employers to provide coverage.