Fixed Annuity Transactions Soar In First Half Of 2014 - InsuranceNewsNet

Fixed Annuity Transactions Soar In First Half Of 2014

That might be expected, considering that other industry researchers have reported similar results.

But there’s a difference. The DTCC numbers are based on actual annuity transactions, not a survey of companies, Andrew Blumberg, group director-analytic reporting for DTCC, told AnnuityNews. These numbers show actual inflows (sales) in the firm’s Analytic Reporting for Annuities database. They also show outflows (money taken out during the period) and net flows (inflows minus outflows). 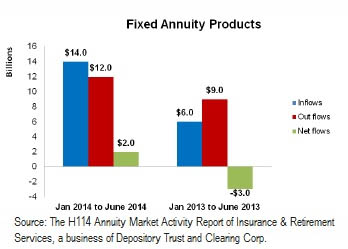 As for fixed annuities, inflows soared 130 percent in the first half to $14 billion, up from $6 billion in first half last year.

Variable annuity inflows increased too, but by only 3 percent to $37 billion, up from last year’s $36 billion.

The percentage differences are even more striking when viewing net flows. On this basis, fixed annuity net flows increased by $2 billion, or 150 percent, from first half 2013 when net flows were -$3 billion, according to the I&RS report.

Meanwhile, variable annuity net flows dropped by 74 percent in the first half, to $1.4 billion from $5.4 billion in the same period last year.

The decrease on the variable side is not necessarily bad, Blumberg commented. Several variable annuity companies have publicly stated that they were trying to reduce the amount of risk they have, and some even encouraged customers to leave certain product types, he noted. This is part of a de-risking strategy that has been the topic of much discussion in recent years.

Because of that, the first-half numbers may indicate something positive or negative, he said.

“Another point to keep in mind that the I&RS numbers are in the aggregate. But on an individual basis, even though some companies were trying to reduce risk, others were trying to grow their business.”

In terms of market share, DTCC provided AnnuityNews with some numbers illustrating how this has changed in recent years. The numbers come from a breakout of the seven annuity categories that I&RS uses.

In the first half of 2014, traditional fixed annuities represented 13 percent of total inflows, this data shows. That’s up from a 7.5 percent share in the same period last year and a 10 percent share the year before that. However, in 2011, the fixed annuity share was slightly higher than in 2014, coming in at a bit over 14 percent in the first half. (Numbers are rounded.)

The growth may be reflecting increased sales of indexed and immediate annuities in third-party distribution. But it may also be reflecting that more firms are using DTCC services for processing various types of annuity transactions in addition to variable annuities, which today represent around 60 percent of transactions (down from about 70 percent in 2011.)

Fixed annuities made their presence felt in another area as well in the first half. This occurred on the list of top 10 products.

Measured on a net flow basis, the Allianz 360 product was the top-ranked fixed annuity in first-half 2014, followed by the NYL Secure Term.

The report is based on business submitted by 120 insurance companies (including 44 holding companies) and nearly 600 distributors. 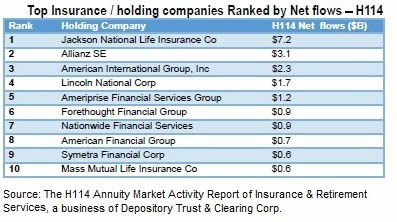 Linda Koco, MBA, is a contributing editor to AnnuityNews, specializing in life insurance, annuities and income planning. Linda may be reached at [email protected].

Tax Incentives May Not Do Enough To Boost Retirement Savings