Amid all the growing concern about financial wellness, one basic question hasn’t been adequately answered: What is it?

That was one of the first quests of a financial wellness task force that LL Global pulled together in response to conditions brought on by the pandemic. The task force of 17 executives quickly realized when they started in July that there was not a good definition of financial wellness – so the key metric was missing.

“If you don't have a definition of wellness that everybody agrees on, you're not going be able to track it, measure it, and know whether or not you're improving on it,” said Alison Salka, LIMRA senior vice president and director, member benefits and research, who is helping lead the panel and is scheduled to discuss some findings during day two of the LIMRA, LOMA and LL Global virtual annual conference on Tuesday.

If you thought the definition was basically how you feel about your financial situation, you would be right. But only partly.

The task force found that financial wellness is actually a three-part test, based on research the panel reviewed.

“We decided that financial wellness really has three components,” said Salka, who will be a panelist with Juneen Kirk of PwC at “The Future of Financial Wellness.”

“One is an emotional component, being free from stress or being confident in your financial situation,” she said. “Another component is objective: Are you able to withstand unexpected expenses? Do you have security at the moment? And then the third element is being able to support goals and be able to plan for the future. You can manage beyond not just today, but also start thinking about and planning for the future.” 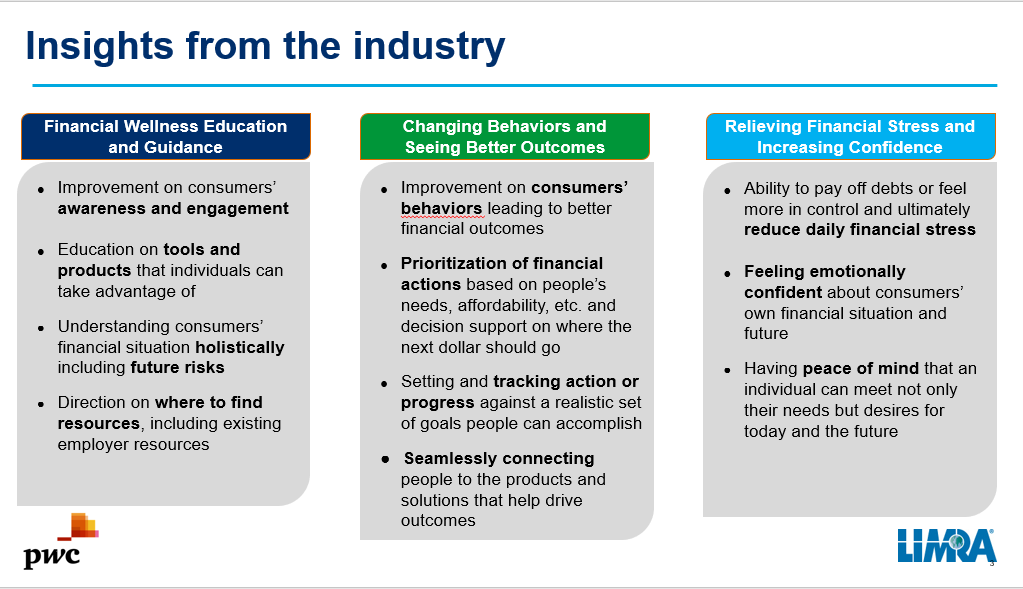 Armed with the definition, the task force used a survey to gauge the current state of wellness with a survey.

The survey showed that four in 10 consumers considered themselves financially healthy; 45% thought they would be better off financially in the next 12 months, which Salka considered “refreshing optimism.” But that optimism was not evenly distributed.

Some people are anxious because they are not certain of their financial health. One way they can determine that is through online tools if consumers don’t have access to an advisor. But that opens the door to another issue – the tools themselves.

Besides realizing that there was not a definition for financial wellness, the executives came upon another hard truth: the online financial tools that many companies are so proud of don’t really help consumers that much.

“Even when they're available either through their employer or through them doing a web search, that utilization is not as high as you would expect,” Salka said, “given how many people say they are financially strapped.”

Panelists came to the consensus that consumers aren't always aware of the tools that are available to them and getting them to use those tools has been a huge challenge. But even once they use them, consumers find out that the tools can be complicated.

“I think that the first generation of tools are excellent – if you had all of your financial records with you, if you could take the time to input all of them, and were willing to see that through,” Salka said. “But you have a finite attention span if it requires you to gather a lot of data. Now tools are more focused on, ‘You know what, I don't need to have the complete and total picture. I just need to get you something that's going to be personalized and help you make the next best decision.’"

Advisors, Employers And Next Steps

One of the next steps is bringing advisors and employers into the process. The task force will be asking them about their perceptions of consumers’ financial wellness and what they have found helpful.

Task force members hope to glean best practices from those discussions that can be communicated broadly.

At this point, Salka said, the group’s research revealed gaps in financial wellness. Those would be groups with multiple challenges such as the sandwich generation, or any generation of women. 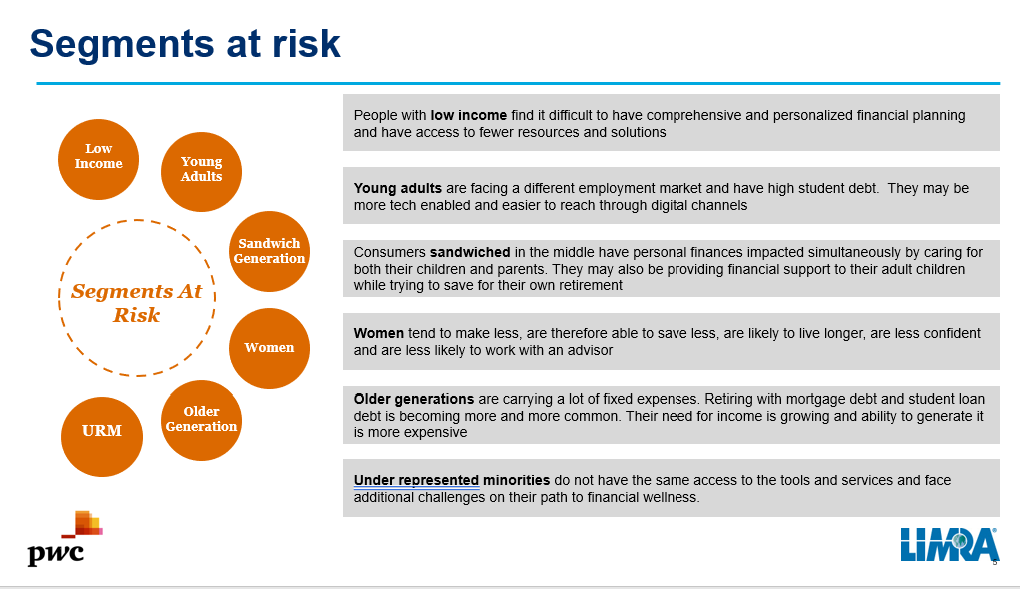 “I think there's an opportunity to reach out beyond those who are in a good position,” she said.

Subgroups will be pulling together ideas based on the research and conversations.

“Really what we're doing is a series of brainstorming and planning and research to understand what's valued so we can help the industry figure it out,” Salka said. “Because it's always been an important issue and I'd say it's more important than ever.”