Business Wire
Despite independent agents having long driven the lion’s share of property & casualty (P&C) insurance industry revenue, many have been feeling neglected by carriers who have had their sights set on the direct-to-consumer market for the past several years.

That’s changing, according to the J.D. Power 2021 U.S. Independent Agent Performance and Satisfaction StudySM released today, which finds that agent satisfaction with carriers has surged as industry shifts have placed a renewed focus on the independent agent channel. 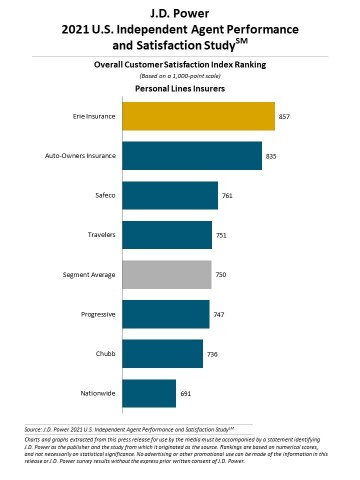 The study, now in its fourth year, was developed in alliance with the Independent Insurance Agents & Brokers of America (IIABA). It evaluates the evolving role of independent agents in P&C insurance distribution, general business outlook, management strategy and overall satisfaction with personal lines and commercial lines insurers in the United States.

“During the past year, some of the industry’s most notable acquisitions and operating model investments have thrust the independent agent channel back to the forefront, resulting in improved agent-carrier relations,” said Tom Super, head of property & casualty insurance intelligence at J.D. Power. “While carriers still have a long way to go, independent agent satisfaction with carriers has reached an all-time high, with many agents citing better communications with carriers, improved servicing levels and higher satisfaction with digital tools.”

Following are key findings of the 2021 study:

For the 2021 U.S. Independent Agent Performance and Satisfaction Study, P&C insurance independent agents were surveyed, which resulted in 3,102 evaluations of personal and commercial lines insurers with which agents had placed policies during the prior 12 months. The study was fielded from April through July 2021.

J.D. Power is a global leader in consumer insights, advisory services and data and analytics. A pioneer in the use of big data, artificial intelligence (AI) and algorithmic modeling capabilities to understand consumer behavior, J.D. Power has been delivering incisive industry intelligence on customer interactions with brands and products for more than 50 years. The world's leading businesses across major industries rely on J.D. Power to guide their customer-facing strategies.

J.D. Power has offices in North America, Europe and Asia Pacific. To learn more about the company’s business offerings, visit JDPower.com/business. The J.D. Power auto shopping tool can be found at JDPower.com.