, /PRNewswire/ -- Despite a nationwide advertising blitz for mobile auto insurance apps and widespread use of digital channels to purchase insurance, auto insurance customers have been slow to adopt digital claims reporting, according to the 2017 U.S. Auto Claims Satisfaction Study,SM released today. The finding is significant in light of dramatically rising claims frequency and high losses, which are forcing insurers to control costs through increased reliance on technology.

" auto insurers have invested heavily in technology that will help them gain efficiencies in claims handling, but there are still certain areas of the claims process where the human touch is proving difficult to replace," said , Property & Casualty Insurance Practice Lead at . "As insurers continue down this path, it will be critical that communication with their customers is not negatively affected."

Following are key findings of the study:

The 2017 U.S. Auto Claims Satisfaction Study is based on responses from 11,857 auto insurance customers who settled a claim within the past six months prior to taking the survey. The study excludes claimants whose vehicle incurred only glass/windshield damage or was stolen, or who only filed a roadside assistance claim. Survey data was collected from through .

J.D. Power is a global leader in consumer insights, advisory services and data and analytics. These capabilities enable to help its clients drive customer satisfaction, growth and profitability. Established in 1968, is headquartered in , and has offices serving North/, and . is a portfolio company of , a global alternative investments and private equity firm headquartered in , and is led by its four founders: , , and .

About and Advertising/Promotional Rules www.jdpower.com/about-us/press-release-info 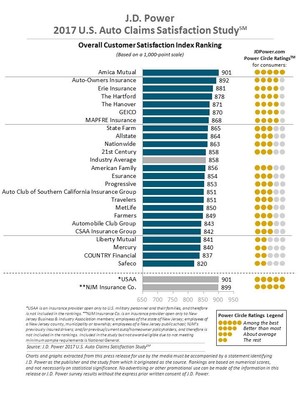 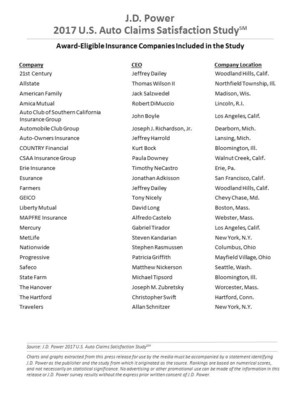