Critics have said President Joe Biden’s hints that he would consider canceling student debt amount to a “bribe” to young voters, but a survey showed that even boomers are struggling with student debt.

A majority of Americans (59%) of Americans say that they delayed financial decisions because of student loan debt in a Bankrate poll taken early this month.

Gen Z and millennial borrowers are struggling the most across the board, with nearly a third of millennials not saving for emergencies (31%) or buying a house (30%) because of student debt.

Progressive legislators petitioned the Biden administration last year to erase up to $50,000 in student loan debt, arguing that the debt has reduced the rate of home ownership and retirement savings. They also asked that the cancellation not be counted as taxable income.

Biden promised during his campaign to cancel up to $10,000, which he has yet to do. But the administration recently extended the pandemic pause on paying on student loans until Aug. 31. For the more than 45 million people who owe a total of $1.6 trillion, that would mean they would start getting bills for the loans just before the November elections.

Members of the Congressional Hispanic Caucus this week said Biden discussed loan forgiveness during a meeting. Activists have been pressuring Biden to make good on his $10,000 campaign pledge.

Republican legislators have blasted the idea, with Sen. Mitt Romney of Utah calling it a bribe, saying “Desperate polls call for desperate measures.” Romney said the forgiveness would be a slippery slope to forgiving other debts. Although Romney’s tweet joined a chorus criticizing the idea, others ridiculed the Republicans’ recent concerns about bail-outs. One tweet reminding readers about the bank bailout after the 2008 crash received more than 150,000 likes.

Although the argument against loan forgiveness has mostly accused Biden of pandering to younger voters, the Bankrate poll shows student loan debt affects a broad range of demographics.

The percentage of people delaying financial decisions drops across the generations, but they are still present. Nearly three-quarters (74%) of Gen Z borrowers and 68% of millennial borrowers have delayed financial decisions, compared to 54% of Gen Xers and 42% of boomers. Gen Z said they are most likely to delay buying or leasing a car, while millennials are most likely to put off saving for emergencies and buying a house.

A majority of respondents (59%) said that getting a degree helped with their career and earning potential, but the youngest cohorts had the most regret. Nearly a quarter of Gen Zers said the wished they worked more while they were in school, applied for more scholarships, got a different degree or went to a cheaper school. Only 15% said they would do anything differently. 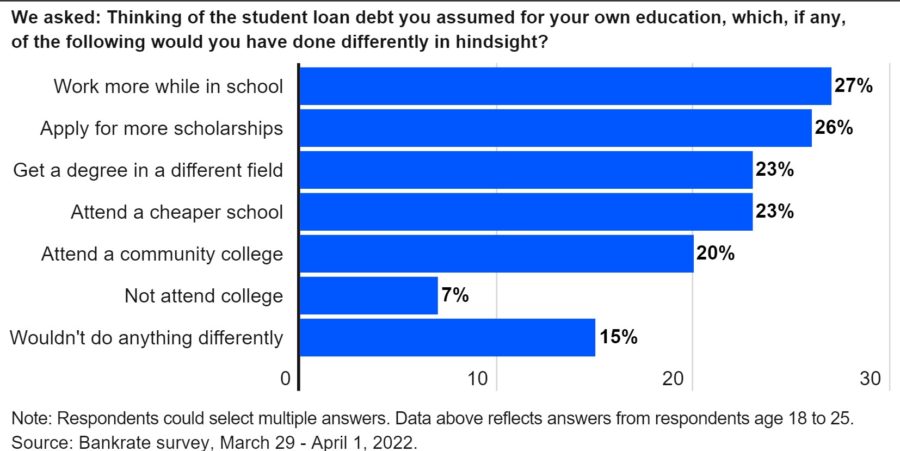