Ray Jones and his brothers were regulars on the livestock show and fair circuit when they were growing up on their family’s dairy farm in southern Ohio. But although they worked hard to get their cattle in shape for the exhibit ring, they didn’t take home any ribbons at first. As they were the only Black family in their state who showed dairy animals competitively, the Jones brothers found their cattle frequently were ignored by judges in favor of those exhibited by white farmers.

One year, the boys decided they had had enough of coming home from the state fair empty-handed. They told their father they weren’t going to the fair anymore. His response? “Back up the truck.”

“That was his way of telling us not to give up. Load those cows onto the truck because we’re going to the fair,” said Jones, who is a wealth advisor in Columbus, Ohio.

Eventually, the Jones family’s luck on the fair circuit turned around. Their herd of cattle began winning enough ribbons and medals to fill several boxes. Jones’ father ultimately was inducted into the Ohio Agriculture Hall of Fame.

Jones said that the lessons learned from his early years of working the family farm prepared him well for success in the insurance and financial services field.

“You take a gamble every year,” he said. “You put your crops in the ground, and you hope you get enough rain or you don’t get too much rain. And then when harvest time comes, you hope you can get into the field and it’s not too wet. My point is there’s nothing guaranteed. So if you grew up and got through that uncertainty, then when you start out in the life insurance business, you’re not afraid of uncertainty.”

Jones said that a farmer plants seeds each year and knows that if they get a good crop six or eight out of every 10 years, they will make money. By the same token, if advisors set a goal of seeing 10 prospects each and every week, they will make enough sales to be successful.

After graduating from Ohio State University in 1969, Jones had a full scholarship to the University of Cincinnati Law School. But illness forced him to withdraw in his second semester. He needed a job, so he began selling office supplies. Soon afterward, he bought a life insurance policy from a Northwestern Mutual agent who told him he would make a good insurance agent. Jones took the suggestion and signed on with Prudential in 1973, the same year he married his wife, Diane.

Jones credited his earliest supervisor, John Poston, with much of his success as he started out in the life insurance business. Jones was the only Black associate in his office, and he said that Poston trained him in the same manner as he did all the other agents under his supervision. “It was important to him that I be just as successful as any of his other associates,” Jones said. “He consistently went out of his way to give me the attention and confidence I needed.”

In his early days in the insurance business, Jones and his wife would spend Saturdays going through the list of births and marriages from the Columbus Dispatch. From that list, he would call on people during the week and set up appointments.

Eventually, Jones realized he needed to develop a niche market, so he put his law school background to work and began to cultivate local attorneys as clients. From there, he became involved with the local bar association, attending their meetings and writing articles for their newsletter. In addition to serving attorneys, Jones built up a group insurance practice among small-business owners in Columbus.

After about 20 years, Jones sold his Prudential practice and became a trainer. He was on the road three days every week, traveling among five states, doing agent training sessions.

How to sell and how to talk to prospects were the biggest training needs Jones saw for the agents he trained.

Jones trained agents for 10 years before going back into practice as a financial advisor. Although he was starting over, he found it easier the second time around. “I had lived in Columbus for a lot of years at that point, and I knew a lot of people,” he said. “I was able to call on some of my old clients. Even though I had to start from scratch, I was starting from scratch with a more elevated clientele than I worked with when I first started out.”

Today, Jones serves a clientele made up mainly of those age 50 and older — what he calls “a pre-retirement, post-retirement practice.” He does a lot of 401(k) rollovers and retirement planning, and manages clients’ assets.

After close to five decades in financial services, Jones said the biggest changes he has seen in the business are the increased use of technology, and the greater variety and complexity of products in the marketplace.

Bob Roach is a Northwestern Mutual advisor in Columbus who has known Jones for many years through their shared involvement with the National Association of Insurance and Financial Advisors-Columbus.

“Ray has a great sense of humor, and he is very personable,” Roach said. “I think the fact that he is so personable is a big factor in his career success.”

Jones and his wife have two daughters, one a kindergarten teacher and the other a nurse practitioner. He enjoys playing golf and outdoor cooking. 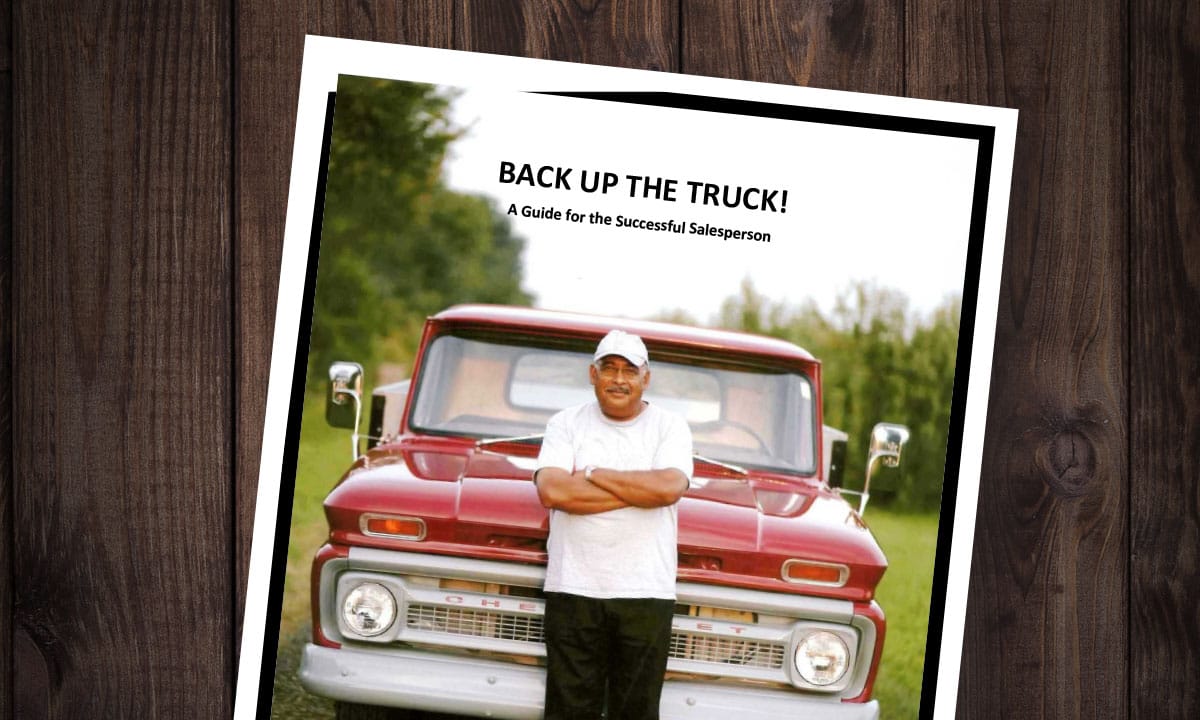 He recently wrote a book, Back Up The Truck! A Guide For The Successful Salesperson, in which he shares his secrets to sales success. But the book also contains many of Jones’ philosophies of business and life, and it includes his story of growing up on the dairy farm in southern Ohio. He said he wrote the book as a memoir for his three grandchildren “to show them, ‘Hey, you can do this.’

In his book, Back Up The Truck!, Ray Jones outlined the sales process he developed to be an excellent listener and stay on track during an interview.

Step 1: Get to know your prospects, and make them feel comfortable. One of the most common mistakes we make is not breaking the ice or initial tension that often exists when we meet someone for the first time.

Step 3: Ask the “magic question.” Here is an example: “Mr. Prospect, do you have any questions (about your insurance or investments in general)?” Then I shut up. If you ask the question sincerely, your prospect will tell you what’s on their mind. They might say, “Well, I want to start a college fund for my children.”

Step 4: Get the pertinent facts. Based on what the prospect tells you in Step 3, proceed to get the facts that pertain to their particular interests and needs. At this point, you can decide whether you will go ahead and proceed with the remainder of your interview or turn the interview into a two-interview situation.

Step 5: Point out the problem through rational analysis. After you have obtained the facts, take your prospect step by step through the solutions you have to show them and how their individual needs can be met using those solutions.

Step 6: Present the solution. After you have illustrated the need to your prospect through rational analysis, then present your solution.

Step 7: Close or keep silent. Here is an example: “Mr. Prospect, this product will provide the service and solution you need, and the cost is $100 per month.” Then I don’t say another thing. On most occasions, the prospect will either say, “Yes, I feel that this is an adequate solution to my problem,” or “I can’t afford $100 per month.” So at this point, it is just a matter of whether they purchase what I have proposed or want some modification of the solution.

Step 8: Don’t forget to get referrals. If you have done a good job on the previous seven steps of your interview — sold yourself and your company, made friends, presented a professional solution that relates to the facts, and have shown this solution through rational analysis — then your prospect will look at you as a professional and be more willing to refer you to others.

Ray Jones, Back Up The Truck, backupthetruck.biz

Back To The Future, Part ?

Emerging From COVID-19: Putting Social In A Socially Distant World

Why Annuity Education Is Critical to an Ongoing Recovery
Annuities are well positioned to help Americans mitigate retirement risks & secure their future.