By reviewing FINRA’s monthly disciplinary reports, press releases and online database, Eversheds Sutherland (US) Partners Brian L. Rubin and Adam C. Pollet found that in 2021 the amount of fines and restitution spiked despite a decrease in the number of cases compared with 2020, driven in large part by a record-setting fine of approximately $57 million in one case. FINRA also continued its years-long emphasis on anti-money laundering violations and focused much of its efforts on protecting—and returning money to—retail investors.

The fines reported by FINRA in 2021 increased to $91 million from $57 million in 2020, a 60% increase. This dramatic bump was assisted by a single, record-setting $57 million fine, which is discussed in more detail below, and represents the highest total in fines since 2016 when FINRA ordered $174 million in fines. Without that one large fine, FINRA’s fines in 2021 would have been $34 million, a decline of more than 40% compared with 2020.

Despite the significant increase in fines, the number of cases with very large fines decreased slightly in 2021. FINRA assessed eight fines of $1 million or more (what we call “supersized” fines), totaling $71 million. In contrast, in 2020, FINRA assessed 10 “supersized” fines, though the total was “only” $39 million. Similarly, in 2021, FINRA assessed one fine of $5 million or more (what we call a “mega” fine)—the record-setting $57 million fine. In 2020, two cases resulted in mega fines (totaling $22 million).

“Last year, the amount of fines and restitution increased significantly from the previous year, indicating that FINRA’s enforcement program is as robust as ever,” said Mr. Rubin. “Looking beyond the record-setting case, FINRA continued its nearly decade-long focus on anti-money laundering in 2021, while also pursuing more ‘nuts and bolts’ issues like suitability and trade reporting.”

The chart below displays FINRA’s fines and the number of disciplinary actions during each of the past 10 years: 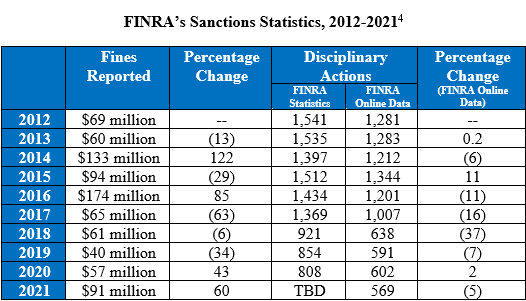 The chart below displays the restitution FINRA reported during each of the past 10 years: 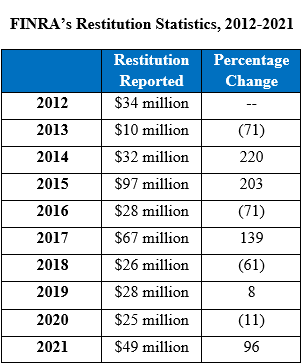 Listed below are the top FINRA enforcement issues for 2021 measured by total fines assessed:

No. 1      Anti-Money Laundering (AML) cases resulted in the most fines assessed by FINRA in 2021. This is the sixth consecutive year that AML has been at the top of the Eversheds Sutherland Top Enforcement Issues list and the eighth consecutive year that AML has appeared on the list. FINRA reported 16 AML cases in 2021, resulting in $4.6 million in fines, compared with 14 cases, totaling $16.2 million in fines, in 2020. AML maintained the top spot due to three large, six-figure settlements. In the largest case where AML was the primary focus, FINRA fined a firm $650,000 and found that the firm failed to reasonably surveil potentially suspicious activity relating to low-priced securities transactions. FINRA found that the firm’s AML procedures failed to discuss significant red flags associated with low-priced securities trading, resulting in failures to file suspicious activity reports where appropriate. Significantly, an internal audit of the firm’s AML program resulted in recommendations that the firm make changes to its AML program, but the firm failed to do so for nearly two years.

No. 2      Unit Investment Trust (UIT) cases resulted in the second most fines for FINRA in 2021, catapulting this type of case into the Eversheds Sutherland Top Enforcement Issues list for the first time. FINRA reported five UIT cases in 2021, with $3.9 million in fines and $10.9 million in restitution. The number of cases decreased slightly from the six cases brought in 2020, while fines and restitution increased significantly from $325,000 and $1.3 million, respectively. UIT cases were driven largely by one case in which FINRA fined a firm $3.25 million. In that case, FINRA found the firm failed to reasonably supervise early UIT rollovers, causing customers to incur potentially excessive sales charges and raising potential suitability concerns. The firm’s supervisory system was not reasonably designed to identify early rollovers. FINRA also ordered the firm to pay more than $8.4 million in restitution to more than 3,000 impacted customers. In December, FINRA announced the final results of its targeted examination of UIT early rollovers: from 2019 through 2021, FINRA issued six settlements requiring firms to pay a total of $6.6 million in fines and $16.8 million in restitution to approximately 10,000 investors.

No. 3      Suitability cases resulted in the third most fines for FINRA in 2021. Suitability cases last appeared on the Eversheds Sutherland Top Enforcement Issues list in 2019. FINRA reported 54 suitability cases, with $3.9 million in fines in 2021. The number of cases increased 29% from 42 cases brought in 2020, while fines increased 109% from $1.9 million. FINRA also ordered $7.3 million in restitution in suitability cases, a decrease from the $9.9 million ordered in 2020. In the largest stand-alone suitability case, FINRA fined a firm $750,000 for failing to establish, maintain and enforce a supervisory system reasonably designed to detect and prevent unsuitable short-term trading of mutual funds and municipal bonds in customer accounts and over-concentration of customer accounts in Puerto Rican bonds. The findings stated that the firm’s automated surveillance system to identify and flag for review mutual fund share switches did not provide critical data to assist supervisors in evaluating the transactions for suitability. Some other suitability cases do not allege unsuitable transactions but rather allege the failure to have adequate procedures or supervisory systems to address or review suitability.

No. 4      Trade Reporting cases resulted in the fourth most fines for FINRA in 2020. This marks the second consecutive year that trade reporting cases have been on the Eversheds Sutherland Top Enforcement Issues list. FINRA reported nine trade reporting cases, with $3.4 million in fines in 2021. The number of cases decreased 74% from the 34 cases brought in 2020, and the fines decreased 51% from $7 million reported in 2020. In the largest trade reporting case, FINRA fined a firm $2.6 million for failing to report, and for inaccurately reporting, over-the-counter options positions to the Large Options Positions Reporting System. The findings stated that these violations were caused by errors in the reporting logic of the firm’s internal risk system that remained undetected for years.