Rao Garuda was living what many people would have called the American dream less than 15 years after he arrived in the United States from India in 1963, with $7 in his pocket.

By 1978, he was an engineer and his wife was a doctor. They had two children and lived in a Cleveland suburb. Garuda even had a red VW Karmann Ghia in the driveway. It might all seem perfect to an observer, but Garuda could not shake the feeling that the dream had a dark lining.

He and his wife were making $140,000 annually, a hefty sum for the late 1970s. Garuda was making less than half of what his wife was, but that was not a problem. 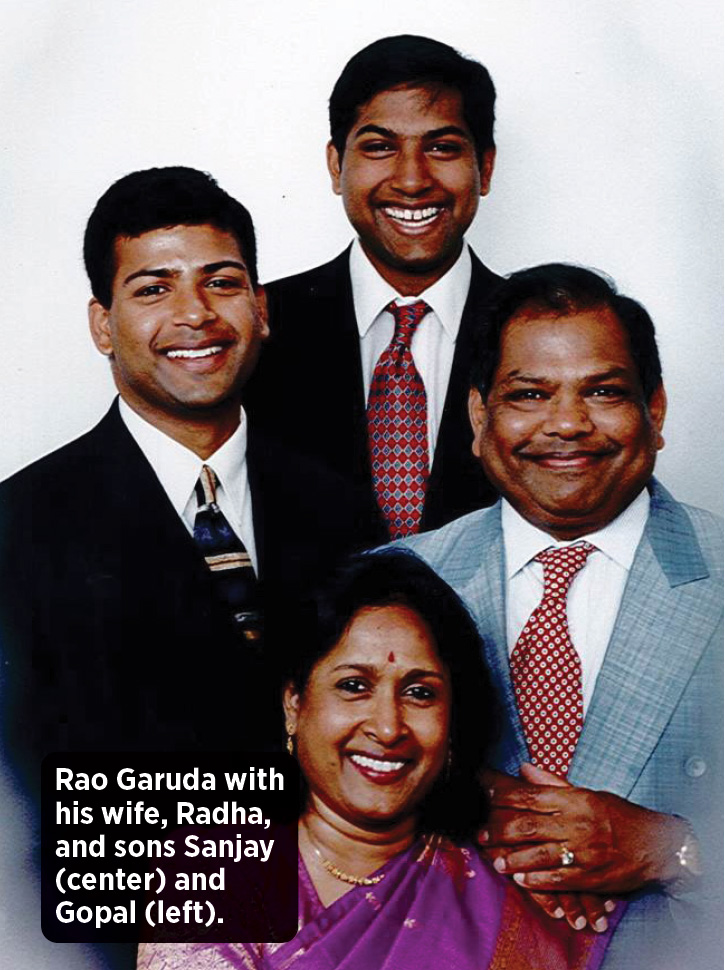 Rather, it was that taxes were taking all of his salary every year. After immigrating from India, working through college to get an engineering degree and starting a new life in Ohio, he essentially was working for nothing.

“My wife thought I was nuts,” Garuda said. “But I was stubborn. I said, ‘What is the point of my working? I have to give up 100% of what I make for taxes, plus borrow money from you, so why am I working?’”

Garuda decided to go in a completely different direction and went back to school full time to become a paralegal.

But his wife had little to worry about. It seemed as though whatever Garuda did, he did it well.

He got straight A’s, except for one vexing B. In fact, he did things so well that others would open doors for him to step into a better, more lucrative career.

For example, after Garuda started working for a law firm, they noticed the quality of his work and recommended another direction for him.

“The attorneys took a liking to me,” Garuda said. “They said, ‘Hey, you’re an engineer. You’re a pretty smart guy, and you don’t have a language problem and you can speak well. And also you’re a good student. You did a nice job in your law school. So, why don’t we have you work with us in setting up these defined benefit plans?’“

He started working with ERISA documents and was paid $15 an hour, not bad in the early 1980s. Then the lawyers pointed the way to yet another direction.

After a few months, the attorneys said Garuda should get his insurance license.

“They said, ‘Hey, it’s not fair to you. You’re very well qualified, and we think that you should be in the insurance business. But we want you to go to The American College and get a CLU and a ChFC,’” Garuda recalled, “because we think you’ll have a much better future, and we kind of like you. You have a very good personality. We think you’d do very well in sales and marketing.”

Garuda took the idea home to his wife, who once again pronounced him crazy.

“She said, ‘You’ve never sold anything in your life. I think you should get a real job where you get a paycheck just like I do.’”

Of course, he was stubborn once again. He obtained his designations and licenses, and started selling in 1981 just as a recession was expanding across the country.

In all fairness, even Garuda shared his wife’s skepticism at first. He put up the same objection to the lawyers’ suggestion. He had never sold anything. Wasn’t it a better idea just to give him a salary?

Garuda sold 26 pension plans and 26 life insurance policies in that first year. He had two things going for him at that moment — support from his law office and a perfect pool of candidates in his own social circle because not only was his wife in the medical field, but also he had eight other doctors in his family. He developed the niche of helping doctors who were in small, private practices.

As he was gaining success and bringing home big commission checks, his wife’s skepticism antenna went up again.

“She said, ‘Are you sure this is real money? Is this legal?’” Garuda said.

He became the rookie of the year at the CLU chapter in Cleveland. Five years later, he qualified for Million Dollar Round Table’s Top of the Table.

The lawyers helped him shape his introduction pitch to help spark interest in social situations. At any gathering with medical professionals, other guests would invariably ask Garuda what he did, and he had a hook hidden in two sentences.

“Well, I save half of your money in taxes,” Garuda would say. “I cut your tax bill by half.” In fact, taxes became his signature proposition. He still slips easily into the argument: Look at the mammoth national debt, edging into $30 trillion. How are politicians going to pay that off?

“They will go after the ultra-wealthy,” someone might say. But those folks have the experts who help them reduce their tax bills. So, who is left? The upper middle class, such as doctors.
Garuda was completing the circle that started in 1978 when he asked why taxes were taking so much from his family. At that time, his family was in the top bracket, with a tax rate of 70%.

Garuda had planned to finish his associate degree in law, go to business school, and then attend law school for his juris doctor. But the lawyers offered a chance for him to shortcut that process right after receiving the associate degree.

Here was a chance to help busy professionals understand their tax exposure. The uberwealthy had the lawyers and accountants to reduce their tax burdens. What did highly compensated professionals have? Pretty fat retirement funds just begging for political attention. How much of their individual retirement accounts and 401(k)s did they hope to see when they needed the money most?

These are the kinds of questions that Garuda used to provoke action now to prevent a bigger problem later.

Alan Porter was selling final expense term life and mortgage protection insurance when he met Garuda at a marketing group’s conference, where Garuda shared his tax planning strategies.
Along with absorbing Garuda’s tax insight, Porter also connected with a particular thing that Garuda said: “There are two important days of your life — the day you are born and the day you find out why.”

Porter had been a Black Hawk helicopter instructor in the U.S. Army until he retired in 1993. He studied the manuals until he knew every nut and bolt and all the ways things could go wrong so he could teach pilots how to get out of trouble. Porter knew his reason for being was to educate people, and after the conference he got on the phone to talk to Garuda about it.

Porter was selling a couple of products at that time, but with Garuda’s help he realized he needed to break out on his own and be a more holistic advisor, like Garuda. He even adopted Garuda’s niche of serving doctors’ practices with tax planning strategies by working with their accountants and lawyers.

Porter caught Garuda’s passion for helping people in their financial situations. It’s a passion that keeps Porter working at age 69 with no thought of retiring, much like Garuda at age 79, still putting in a full day.

But perhaps what impresses Porter most is Garuda’s philanthropy. For example, Garuda goes back to his native India each year for a humanitarian project.

“He works with Doctors Without Borders and helped 150 people get fitted with prostheses so they could walk again,” Porter said. “But one of the stories that sticks with me is the year before that, he goes over there and they’re restoring people’s eyesight. They haven’t been able to see for years because of cataracts. And Rao’s in the hospital with this guy recovering, and they’re starting to take his bandages off his head and the guy’s holding Rao’s hand. Rao asked him, ‘What do you see?’ He said, ‘I see an angel sent from God to restore my eyes,’ and he’s looking right at Rao.” Garuda said he was driven to philanthropy by his gratitude for the opportunities given to him and his family.

His two sons went beyond the expectations he and his wife had for them. One became a gastroenterologist and married another doctor. His other son finished second in his class at Harvard University and at 27 became one of the youngest managing directors at Merrill Lynch.
Garuda’s lifetime mission is to raise and give away $500 million, and he has already raised $300 million. He even inspired one of his clients to give to charities the $150 million he made from an IPO.

In his most recent humanitarian trip to India, he took 15 doctors from the Cleveland area to treat people for free in 10 “miracle camps.”

“Each day, there were 1,000 people from the villages, the poorest of the poor in India who did not even have the bus fare,” Garuda said, also recounting the scene that Porter described. “And the last day of the camp, we rounded up 150 people who never walked in their life because they did not have legs. So we fitted them with prosthetic devices, and for the first time in their lives they were able to walk on their own legs. And you can imagine the whole city came out. They were throwing flowers at these doctors and the patients were crying.”

Although Garuda thinks big in his giving, he was inspired by a small observation he made while helping out in a Cleveland soup kitchen 25 years ago.

“This was February, and it was snowing like crazy,” Garuda said. “When I went there in downtown Cleveland, there were 250 people waiting in line for one meal. I asked myself, ‘How in God’s name can this happen in the greatest country in the world?’ So, that really pissed me off so badly I said, ‘I want to help as many people as possible and make sure this never happens.’”

He also wants to help others see the need that is all around them.

He told them to wrap people in the blankets and see their reaction. As he predicted, the young people were moved by the experience.

“These youngsters who were given everything, who had everything done for them, for the first time in their lives they saw the joy of giving,” Garuda said. “They saw how they could make such a huge difference. That is the joy of practicing what we preach.”

Star Wars And IUL: Sometimes You Both Frustrate Me